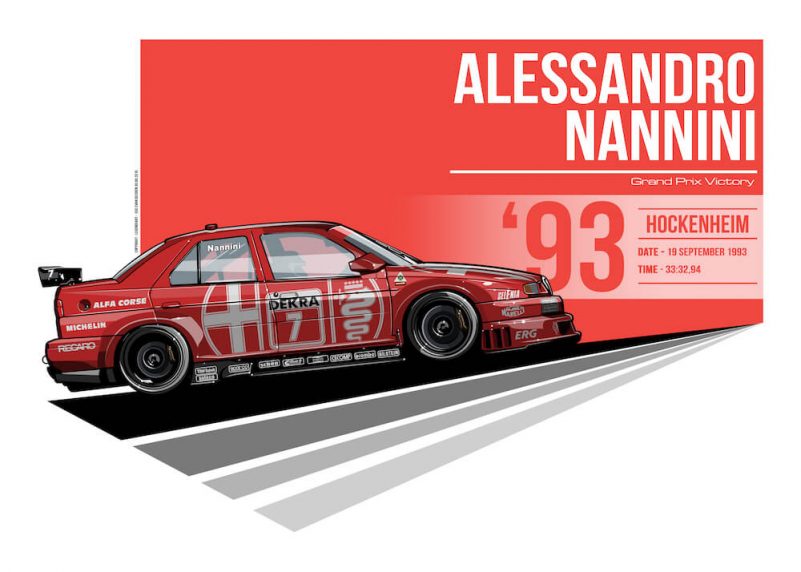 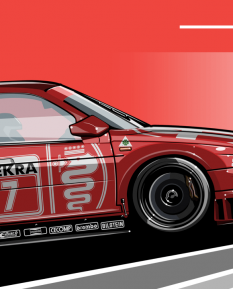 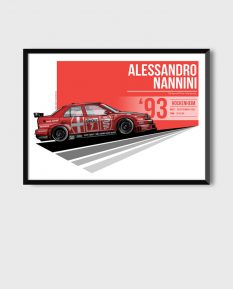 With more than a century of racing history, Alfa Romeo is among the brands with high-class motorsports heritage. This poster artwork celebrates some of the most fruitful racing efforts of Alfa Romeo. It is not very common in motorsports to beat your opponent on their home soil but that is what Alfa Romeo 155 V6 Ti DTM does with the Germans.

After some rather mediocre stints in Indy cars, Alfa Corse turns to touring championships. The debut of Alfa Romeo 155 seems to be an excellent opportunity. Its racing endeavours start in Italian Touring Championship where it wins 17 out of 20 races in season 1992.

These encouraging results support the decision Alfa to enter 155 in DTM, which faces brand new regulations for season `93. The requirement of production-based V6 engine forces Audi and BMW out of the championship. The Germans participate only with Mercedes-Benz.

The front-drive layout of Alfa 155 with an engine hanging above the front wheels is not a perfect solution. Luckily, the Italians know how to do it so they choose a 2,5-litre version of the Busso engine. This engine lands top spot in our own ranking of the most beautiful engine bays in the world. The engine is able to rev up to 11,800 rpm producing 420 naturally aspirated horsepower.

Now you can own this piece of motorsports history as an Alfa Romeo 155 V6 Ti DTM art print by Evan DeCiren. Order now at Simply Petrol marketplace.