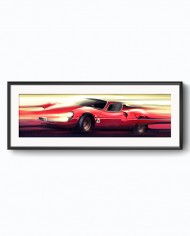 Tipo 33 Stradale is one of the eternal beauties of its era. When this Alfa Romeo was shown for the first time to the public everybody was mind blown because of its design, track potential and price. Due to its extremely low weight the 2 liter V8 with 270 hp was enough to propel the car from a standstill to a kilometer point mark in just 24 seconds. That was faster than Lamborghini Miura, Ferrari Daytona and Maserati Ghibli which relied on much bigger engines. But the Tipo 33 Stradale was in love with revving knocking the red line at the spectacular 10000 rpm. Built in attempt to make racing technology available to the market, Alfa priced the 33 Stradale at whopping $17,000. In 1968 the average price of a new car was just below $3000. So it became the most expensive car of its time with just 18 built between 1967 and 1969. There is no information regarding the current price of this car since nobody is willing to sell the few vehicles that survived. Now you can own this pure masterpiece, penned by Franco Scaglione on a art print, beautifully created by Sebastiano Ciarca.