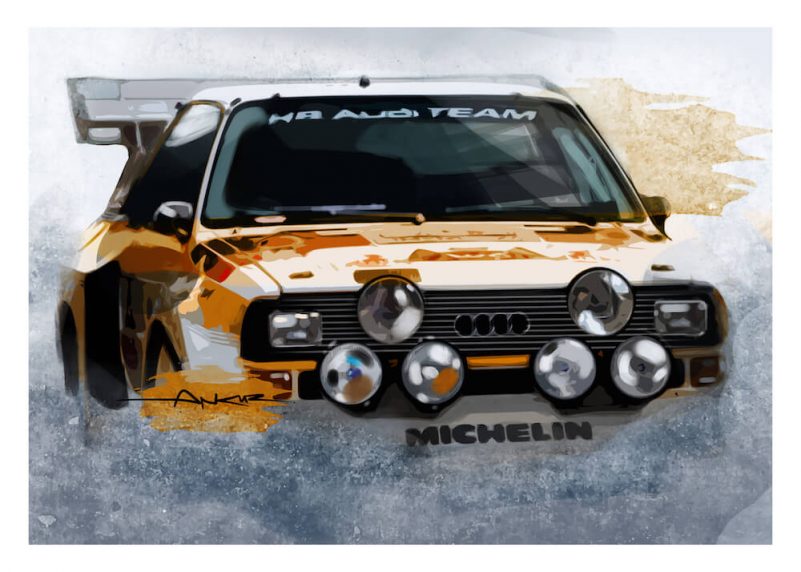 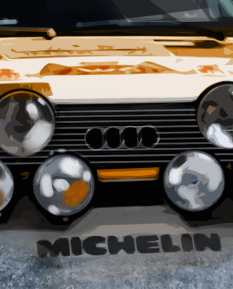 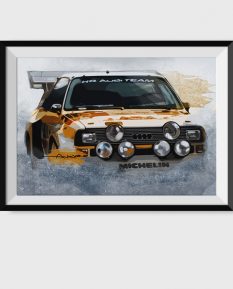 Back in the day, the white-yellow HB livery of Audi Quattro equals to a rally winner. This car predefines the future of rally sports and is the first rally car to successfully use all-wheel drive. Its predecessor UhrQuattro proves to be a promising racer but has a lot of issues as well. There is a need for a new edition. The wheelbase becomes shorter and a few inches are cut from the sides which gives the Sport Quattro its unusual profile. Artist Ankur Singh celebrates the beauty of this trendsetting car in his Audi Sport Quattro Group B art print.

The S1 version of Audi Sport Quattro debuts at the 1000 Lakes rally in 1985. The car flaunts its dramatic makeover - it has a massive spoiler in the front and a large wing at the rear. The engine can reach over 500 hp but the turbocharger causes an excessive turbo-lag. Audi engineers solve the problem by pouring fuel into the turbo to keep it spinning even when the throttle is closed. It results in the epic flame-spitting which fans really love.

Audi Sport Quattro Group B does not abandon its motorsports efforts after the cancellation of Group B. With Walter Rohrl behind the wheel, it becomes a winner at its first Pikes Peak attempt. The car receives additional modifications with an engine capable of more than 1000 hp. Michele Mouto is the first lady to win WRC and she races Audi Quattro. Audi engineers experiment with an automatic racing transmission which presents itself as the DSG double-clutch gearbox 20 years later.