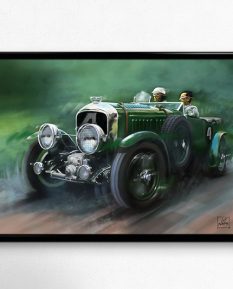 If you have ever wondered about the automotive equivalent of the iconic British Spitfire, let us acquaint you with Bentley 4½ Litre Supercharged. This is one of the most valued racing cars with a single victory - 1930 French Grand Prix, even though 4½ Litre won Le Mans in 1928, 1929 and 1930.

The Supercharged edition, also known as Blower Bentley has pretty interesting story since Walter Bentley opposed to the idea of forced induction. But he was out of control of his company at the time and the project was continued against his will. That’s why the supercharger is located at the end of the crankshaft, in front of the radiator. Walter Bentley didn’t allow anyone to do any modifications on the engine and the supercharger was installed at subcontractor`s facilities.

Bentley 4½ Litre Supercharged had low revving 4-cylinder engine, capable of 175 hp at 3500 rpm for the touring version and 240 hp at 4200 rpm for the racing edition. The engine was pretty advanced for its time because of the 4 valves per cylinder and the dual SU carburetors as well as dual Bosch ignition. Pretty ingenious, this racing Bentley had quick release filler caps of radiator, oil and petrol tanks. By pulling single lever you can open all of them, which saves times at the pit stop.

Now you can own this classic racing Bentley as a beautiful art print created by Luis Ferrara.