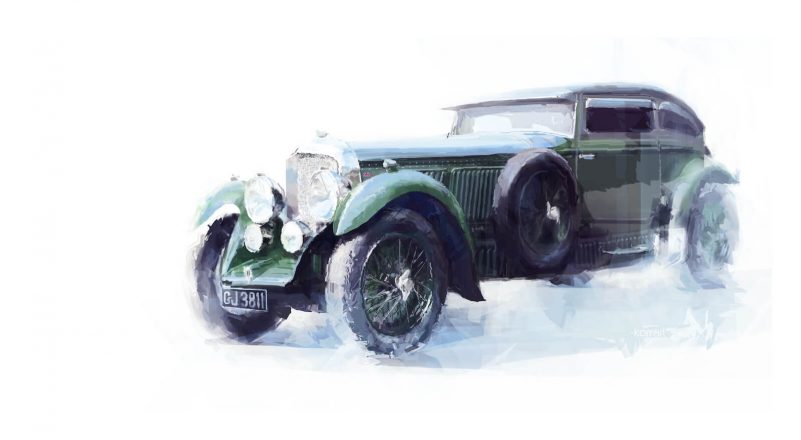 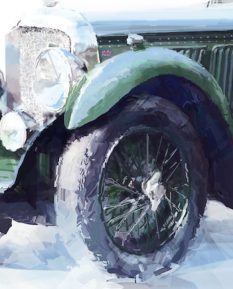 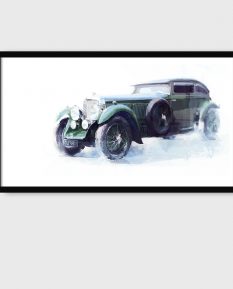 This Fine Car Art is dedicated to the most successful race-cars built by Bentley. The Bentley Speed 6 Coupe by Gurney Nutting is the car, which inspired the modern day design of the Bentley Continental GT. The artwork, made by the talented illustrator Artem Halko, is portraying the famous vehicle, driven by the ultimate Bentley Boy - Woolf Bernato.

Between 1926 and 1930, Bentley produced 182 chassis of their Speed Six model. It got bodies by different coachbuilders, some of them quite extraordinary and beautiful at the same time. What made them legendary is their racing success. From 24 Hours of Le Mans to the Blue Train Race, Bentley Speed Six was nothing less than outstanding.

This Bentley Speed Six Coupe painting is displaying the car with its lowest roofline, but with the absence of the wine-coloured cabinet at the rear, because it's an original purpose build a single-seater racing car. One famous story around the car comes from the era of the legendary "Blue Train Races." It was made of a series of record-breaking attempts between automobiles and trains in the late 1920s and early 1930s. It saw many motorists and their own or sponsored automobiles race against the Le Train Bleu, a train that ran between Calais and the French Riviera.

"Barnato was at a dinner party on board a yacht near Cannes in March 1930 when the subject of racing the famous Blue Train came up, as both Rover and Alvis had recently beaten the train from St Raphael to Calais. Barnato wasn't impressed, calling the achievement 'no great shakes.' He wagered £200 that at the wheel of his Speed Six he could beat the train to Calais with ease."

None of Mr. Bernato companions took the bet so he did the run anyway, just to prove he can do it. And he did it. At the time everyone thought the Bentley Super Six Coupe was the car used in the Blue Train race, but recent investigations revealed the vehicle was delivered some days after the event. Regardless of the fact, the great one-off design has attained its legendary status.

Last but not least – because of the Blue Train race and multiple traffic road violations, Bentley was banned by French authorities to present their cars at the Paris Motor. How sweet.

Make this beauty yours. The Bentley Speed Six Coupe art, created by Artem Halko and published by Simply Petrol.