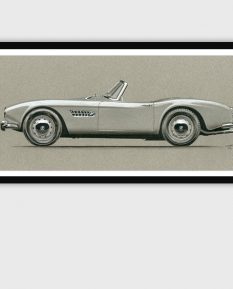 There aren't many automotive beauties that are as seductive as the BMW 507. This car thrills the rich and famous all over the world, including Elvis Presley, the kings of Morocco and Greece, Ursula Anders and last but not least John Surtees. Back in the day the British races for Count Domenico Agusta's MV Agusta factory team. He receives the BMW as a gift for winning the`56 Motorcycle Championship. Actually, the Count covers half of the price - read more of the story here.

BMW 507 is intended to be a luxury car that fills the gap between the expensive Mercedes-Benz 300 SL and more affordable and underpowered sports cars like Triumph and MGs. Max Hoffman, the notorious importer of high-end European cars in the USA, influences the project. He is also the man behind Mercedes-Benz SL, Porsche 356 Speedster and Alfa Romeo Giulietta Spider.

Unfortunately, significant construction costs double the target price to more than $10 000. Despite the interest of celebrity buyers and its genuine sports V8 characteristics, BMW 507 doesn't get even close to the success of 300 SL. With just 252 cars built, 507 almost leads BMW to the edge of bankruptcy. Its production run ends in 1959 and is extremely short with only three years span.

More than a half-century later, BMW 507 remains a design milestone. It is among the best looking BMW cars ever. Because of its rarity, now it is a pretty expensive classic car that changes its owners for amounts like $3 000 000. BMW makes it to the news headlines by finding, buying and restoring the car once owned by Elvis Presley. Back in the day he repaints his white 507 in red as a protective measure against fans drawing with lipstick on his car. BMW Classic restores the singer`s car to its initial colour and specifications and now proudly displays it on special events. We`d do the same, definitely.

Order now your piece of BMW 507 art at Simply Petrol.