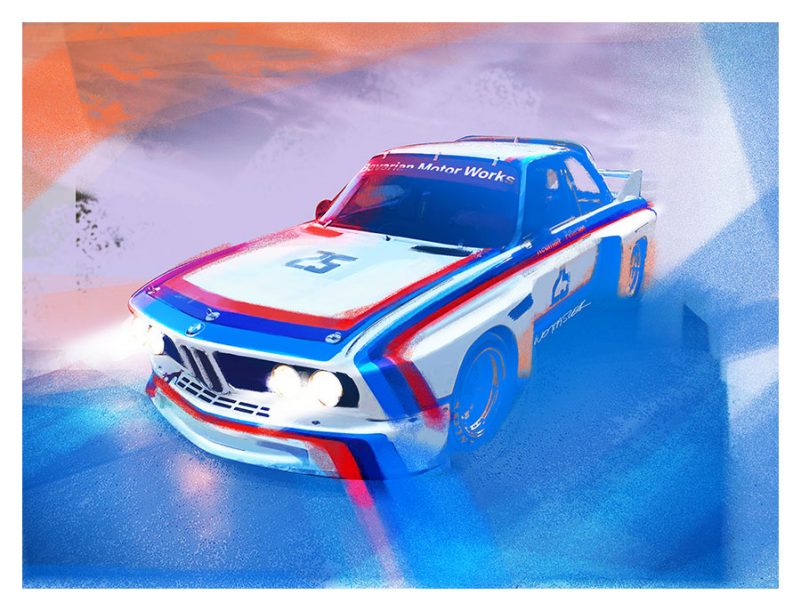 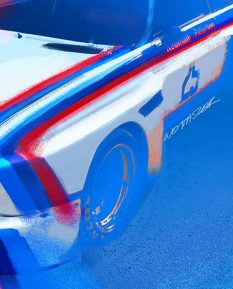 Art Prints  by Michal Wojtaszek
Starting from $ 20. Continue to Sizes

This BMW E9 3.0 CSL art print presents one of the coolest racing cars of all times. The designer of the base car is Wilhelm Hofmeister. Maybe you have heard his name before. That's the person whom we owe the signature kink on the back windows of nearly all BMWs in the last year 50 years.

The power of the M30 6-cylinder engine

In 1971 the M30 engine is bored out to 3-liters. Thanks to that and to two carburetors the power jumps to 180 hp at 5500 rpm. It is evident to many fans that the M30 engine may soon dominate the European tracks.

BMW 3.0 CSL debutes in 1972 and gets a racing approval in the European Touring Car Championship. The letter "L" in its name stands for leicht/light. The thinner body steel, eliminated trim and soundproofing, alloy panels in the doors, bonnet and trunk, combined with Perspex side windows achieve the low weight of the car.

The racing version of the BMW 3.0 CSL wins the European Touring Car Championship in 1973 and nails a class win at Le Mans. This race car keeps on winning the ETCC every single year between 1975 and 1979. And that's enough to be said for its true Bavarian power. Some of the ETCC cars are converted and raced up until 1979, and they manage to win numerous races including Daytona 24 in 1979. During the IMSA GT Championship in 1975, Ronnie Peterson wins several races.

The Batmobile nickname comes because of an aerodynamic kit introduced in 1973.

The racing history of this vehicle is truly spectacular. We cannot miss the fact that the BMW 3.0 CSL Batmobile race car is the base for the notorious art cars of the Bavarian brand. They are the first of their kind worldwide and are created by the American artists Alexander Calder and Frank Stella. Later on, these art cars find their place on the racetrack. They achieve such a huge success that the Bavarian brand decides to continue with this initiative. The rest is history.

Celebrate the Bavarian's brand creativity with this BMW 3.0 CSL Batmobile art by  Michal Wojtaszek. Select your preferred paper and size below.