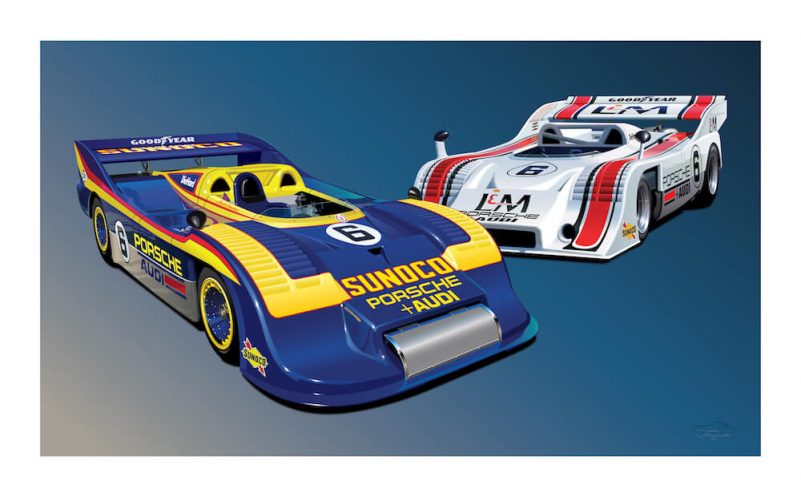 This beautiful Team Penske artwork by Terry Smith is telling the last part of the epic story of 917 in an extremely special way. It is like that because those are not just the last, most powerful and brutal incarnations of a legendary car but also because this particular artwork is created by the artist who designed their liveries.

That’s right, back in the day Terry Smith created the sleek L&M and Sunoco liveries for Team Penske Can-Am Porsche 917/10 and 917/30. These cars were so good at racing that forced McLaren to leave Can-Am series and the 917/30 is known as Can-Am killer because it won 6 out of 8 competition during season 1972.

The truth is that the epic success of the Turbopanzer wouldn’t be possible if 917/10 didn’t gave its best a year earlier. L&M livered Can-Am Porsche 917/10 wasn’t this powerful but it was good enough to block McLaren`s 5-year dominance in the Can-Am series. Powered by the 5-liter air-cooled flat-12, 917/10 was rated at 850 hp. This car demanded respect of its drivers as Mark Donohue learned the hard way. A racing accident left sidelined him with broken preventing him from winning 1972 Can-Am title. It was a bitter rivalry between Follmer and Donohue, for sure.

Now you can own this beautiful Can-Am Team Penske art beautifully created by Terry Smith, the man who designed their L&M and Sunoco liveries, and carefully issued by Simply Petrol.