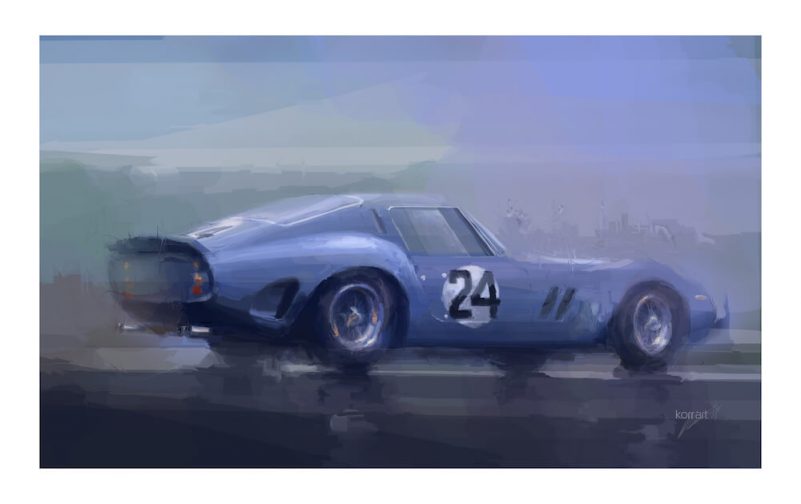 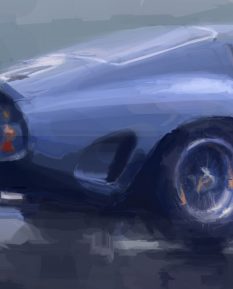 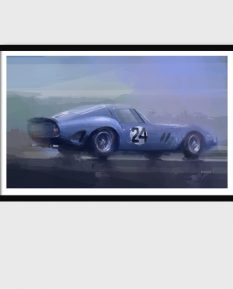 Ferrari 250 GTO is the Mona Lisa of classic cars. The car has inspired many artists at Simply Petrol and this time our special guest is chassis #3387GT Berlinetta. It is the second Ferrari 250 GTO that is built at Maranello. That same car is also used as a test car at Monza by the Scuderia Ferrari. After that, it is sold to Luigi Chinetti Motors in New York.

The vehicle's certificate of origin dates back to 16th of March 1962. A week after that the #3387GT Berlinetta finishes second overall and first in class at Sebring. Its pilots are Phill Hill and Olivier Genadebien.

Right after this impressive competition, Chinetti Motors sells the car to Robert Grossman with some special preparations for Le Mans already done. Under its new ownership, the car finishes 6th overall and 3rd in class in '62 Le Mans with Bob Grossman and George Roberts Jr. behind the wheel.

Even though the racing stripes remain, the #3387GT loses its original metallic blue paint in favour of the classic Ferrari red. As one of the first 250 GTOs, it undergoes some modifications. These include front brake ducts, blinkers relocation to fender and gas filler movement. All of these changes later become standard for all 250s that come out of Maranello.

"Ferrari 250 GTO is the ultimate Grand Touring car of the 60s … or, some might well argue, of all time."
Phill Hill

In 2017 the British racing driver Gregor Fisken, who runs a classic car dealership, pays 37 million British pounds (around $49.4 million) for the #3387GT. After the deal is closed, disputes over the original gearbox of the car bring seller and buyer to court. A year later another 250 sells for the record $70 million, thus becoming the world's most expensve car.

Not many can afford having an original 250 GTO at their garage but this artwork print by Artem Halko is far more manageable. The artist gets inspired by the dynamics, mysteriousness and classic elegance of this spectacular vehicle. Make this piece of art yours by ordering now at Simply Petrol.