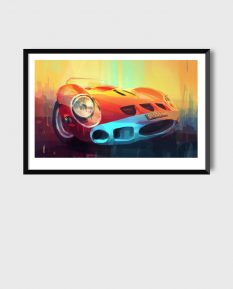 Ferrari 250 GTO #4399 is an exceptional car. Chassis number #4399 is among the most special of the 39 examples ever built. It has the rare Pininfarina body of the Second series GTO with just four units produced. The artwork above features the car, driven by Graham Hill, Innes Ireland, Mike Parkes and Jack Sears. Naturally, it won a bunch of competitions, including '63 Tourist Trophy at Goodwood and the Spa 500. Initially ordered by Colonel Ronnie Hoare, this 250 GTO is as British as it gets.

After its first successful racing season in 1963, the car was sent back to Maranello. The paintwork was redone by Scaglietti with the combination of Rosso Corso red and Cambridge Blue. The car is known with this colour scheme and still wears it. Anthony Bamford, the Chairman of JCB, bought the car in 1969 and still drives it regularly on track. By the way, Lord Bamford is the only person on earth with a couple of 250 GTOs in his garage. Unfortunately, Andy Newall crashed the #4399 during the 2017 Goodwood Revival. It was an unlucky maneuver of overtaking Ferrari 250 LM, which ended in the tire wall. The damage done was significant, but still manageable, regardless both the body and suspension were hurt.

This vivid Ferrari 250 GTO #4399 representation is created by Artem Halko and delicately impressed by Simply Petrol.