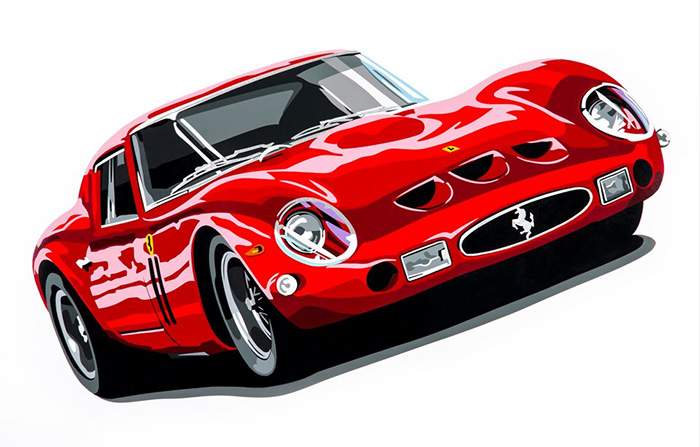 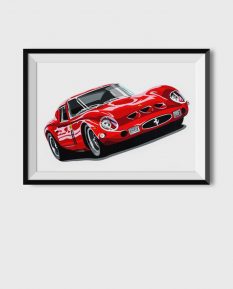 Art Prints  by Joel Clark
Starting from $ 45. Continue to Sizes

Ferrari 250 GTO is undoubtedly a masterpiece of the automotive engineering art. It is so rare, so beautiful and was so successful in the glory days of motorsports during the 60`s, so it became a legend.

Ferrari 250 GTO is nothing less than the ultimate automotive masterpiece

The story of 250 GTO is pretty interesting. When Jaguar E-Type was launched in mid-March of 1961 it caused a lot of fear in Ferrari headquarter at Maranello. The elegant, yet fast British coupe was a direct hit to Ferrari racing capabilities. At that time Ferrari 250 GT SWB was the racing workforce. The debut of E-Type suggested that the 250 GT has a pretty strong contender. This is how one of the last capable front-engined racing cars was born.

Enzo Ferrari pointed Giotto Bizzarini as a project manager for the Ferrari 250 GTO. At that time, Bizzarini had just 8 years of work experience as an engineer. He was given a 250 GT SWB chassis as a test mule and the work was started. First, Bizzarini changed the rear suspension by using coil springs over the rear suspension`s shocks. Next, he moved the V12 engine far behind the front wheels in order to achieve an optimal center of gravity. This solution was helpful in terms of aerodynamics because it significantly reduced the frontal area, hence the aerodynamic drag.

Just 39 Ferrari 250 GTO were built between 1962 and 1964. 33 of them were Series I, 3 were Series II bodywork, they look similar to Ferrari 250 LM and 3 Ferrari 330 GTO specials with a larger engine. Enzo Ferrari successfully and shamelessly cheated FIA officials who wanted to check if the car was built in over 100 numbers, an obligatory rule for GT homologation. Ferrari 250 GTO racing debut was at 12 Hours of Sebring in 1962, driven by Phil Hill. He finished second, after the Ferrari prototype Testa Rossa of Bonnier and Scarfiotti. So it wasn't surprising when Ferrari won the GT titles in 1962, 1963 and 1964. And this is just a small reason for Ferrari 250 GTO art existence.

Now you can make yours this beautiful Ferrari 250 GTO art created and issued by Joel Clark.