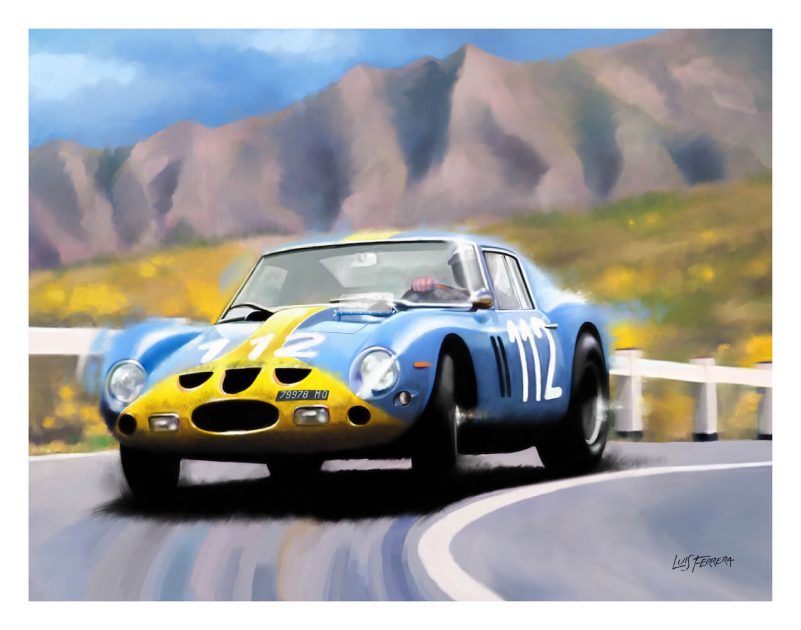 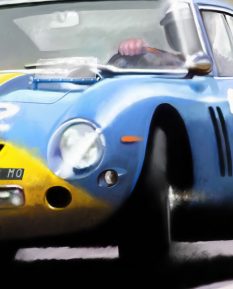 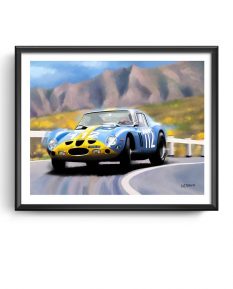 This Ferrari 250 GTO art captures one of the most iconic Ferrari cars during its run at the Targa Florio in 1964. The story of the blue-yellow 250 GTO is truly exciting, especially having in mind the fact that it still exists in this livery and is in a fully restored condition.

Ferrari manufactures the car with chassis #3445 GT. Its first owner is the Bologna-based publisher Luciano Conti. He receives the car in 1962 and sells it later that year. With Conti, the Ferrari attends its first competition, the Bologna - Passo Della Raticosa. The new owner of #3445 GT chassis is Count Giovanni Volpi di Misurata, a nobleman with a racing passion. His team competes under the patronage of the Venice Republic. At this time the Ferrari 250 GTO wins the Trophee d`Auvergne with Carlo Maria Abate behind the steering wheel.

Ulf Norinder from Sweden buys the car in April 1963. Following the current regulations, he changes its colour from red to blue and yellow so it matches the Sweden flag. Norinder wins a track event in Vastkustloppet, Sweden. The car also finishes second in its class at the Targa Florio both in 1963 and 1964.

The chassis #3445 GT Ferrari 250 GTO changes its owners several times before the American billionaire Chris Cox buys it and restores it with the help of Ferrari Classic division. Unfortunately, he crashes the car into a Hyundai during the Le Mans Classic competition. It is immediately sent back to Ferrari Classic for repairing.

Now you can hang on your wall this piece of beautiful Targa Florio history. Order now at Simply Petrol your Ferrari 250 GTO art print by artist Luis Ferrera.