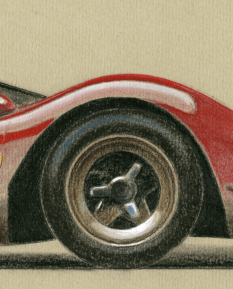 David vs. Goliath, Henry Ford vs. Enzo Ferrari and GT40 vs 330 P3/4. This is a story filled with ego, money, racing, and myths. A story that gave us one of the most captivating endurance racing rivalry and a story, which gave us one of the most beautiful racing cars ever, now depicted as fine car art. Meet this stunning Ferrari 330 P3/4 art, created by Nicolas Cancelier. An art, recreating one of the iconic cars, came out of the small town of Maranello.

This Ferrari 330 P3/4 art is captivating the eternal lines of pure beauty and is suggesting the engineering mastership behind. This very car was meant to battle with the huge budgets of Ford and because of this, it introduced the fuel injection and fiberglass into Ferrari stable. It was faster and more reliable than Ford GT40 but it never won 24 Hours of Le Mans. However, Ferrari 330 P3/4 managed to finish 1-2-3 at the 24 Hours of Daytona and pulled wins at Spa and Monza circuits.

Ferrari 330 P3/4 and its private racing sibling Ferrari 412 P were the last Ferrari cars made for endurance racing. In early 70`s, when the rules were changed, Enzo Ferrari switched his racing efforts from endurance to Formula 1. The beautiful 330 P3/4 turned to be obsolete.

Ferrari made just four examples of the P4 engined cars. Three were 330 P4 and one was P3/4. One of them was scrapped by Ferrari after racing accident but its chassis number 0846 was taken by a US replica. 0856 remains in its original state and is now owned by Lawrence Stroll, a Canadian billionaire, and father of Lance Stoll who recently became the second-youngest rookie to take a podium spot in an F1 competition aged just 18 years old. Chassis 0858 was converted into a 350 Can-Am racer by Ferrari but is now fitted with a P4 Berlinetta body. Chassis 0860 was also converted to a 350 Can-Am but now is wearing a P4 Spyder body and is held in the Bardinon Collection.

Think of them as the Mona Lisas of the Ferrari world. We are more than happy to make possible for you to hang this Ferrari 330 P3/4 art on your wall, beautifully created by Nicolas Cancelier and carefully issued by Simply Petrol.