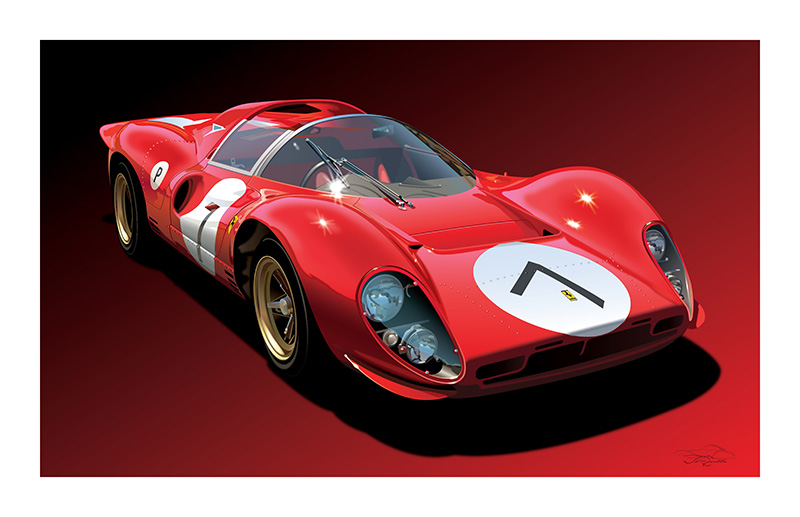 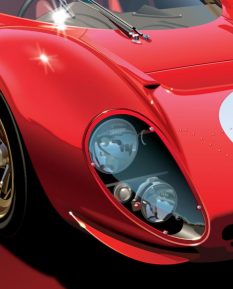 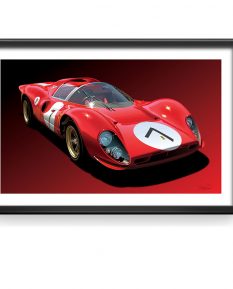 This car flaunts one of the best-looking competition bodies ever created. Period. This Ferrari 330 P4 art is an epic tribute to an epic car. It`s tiny Lampredi V12 was radically redesigned by Franco Rocchi who added Lukas fuel injection and new three-valve cylinder head in order to stand against the raw power of Ford GT40.

The idea of Enzo Ferrari for this car was to beat the big, heavy and powerful GT40s through lightweight, razor like handling and technical excellence. It almost succeeded with memorable 1-2-3 at Daytona. Il Commendatore kept a picture of this glorious moment until his death. Under the belt of the 330 P4 are also first place in 1000km of Monza, as well as second and third places in 1967 24 Hours of Le Mans, with 4 laps less than Ford GT40 who took the title.

Only 4 330 P4 cars were made. They were an evolution of Ferrari 330 P3 with shortened chassis, improved handling and engine. One of them is lost forever because it was scrapped by Ferrari due to previous accidents and the fire the car caught during Le Mans in 1967. Another was converted into a Can-Am racer but now is fitted with a P4 Coupe body replica, created by the original blueprints. The third has a similar fate but now is matched with a P4 Spyder body and you can see it at the French automobile museum. The fourth car is in original condition and is privately owned by the Canadian billionaire and Ferrari collector Lawrence Stoll.

Due to the eternity of this design, a lot of replica cars of the Ferrari 330 P4 were made. Their price range is pretty wide and highly depend on the mechanical basics. Some of them are so good that they can easily fool a Ferrari enthusiast.

This is not we are going to do with you! At Simply Petrol we are sharing with you a perfect Ferrari 330 P4 art print, created by Terry Smith.