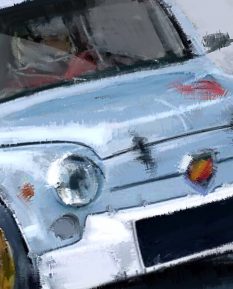 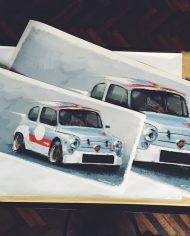 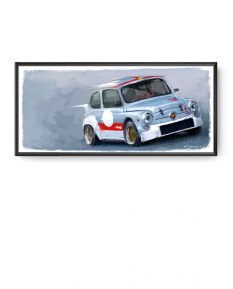 FIAT-Abarth 1000 TCR is a tiny, nippy racer that is definitely an inspiration for car artists and for Sebastiano Ciarca in particular.

During the late '60s, Carlo Abarth rules the racing tracks in Europe thanks to FIAT 600. It is a classic postwar mini car that is cheap, rattling, economical and easy to maintain. Abarth`s engineering magic turns it into a pure touring racer with a lot of titles. He keeps the light body, raises the engine capacity up to 1000 cm3 and adds a hemispherical cylinder head, or a ‘radiale’. All that leads to a power output increase of 115 horsepower.

This is actually the first time a pushrod engine gets more than 100 hp. There are also brand new exhaust pipes, which are bigger than you might expect having in mind the size of the car. Nevertheless, the overall view of the back of the car is much more dramatic with its exposed engine under an always open hood. The engine is so big that the bonnet just can't be closed.

Abarth 1000 TCR is designed to meet the Group 5 regulations for European Touring Car Championship in the late '60s. Despite its size, or perhaps because of it, it proves to be a very competitive car when in the hands of the right driver.

An interesting part of its story is that Carlo Abarth makes a lucrative deal with Vittorio Valetta, a CEO of FIAT back in the day. Abarth will receive his payment only if FIAT-Abarth cars become victorious racers. That's why he sends a detailed list with the results of all Abarth cars every week.

Enjoy some Italian racing inspiration with this FIAT-Abarth 1000 TCR art print by Sebastiano Ciarca. You can order it now at Simply Petrol marketplace.