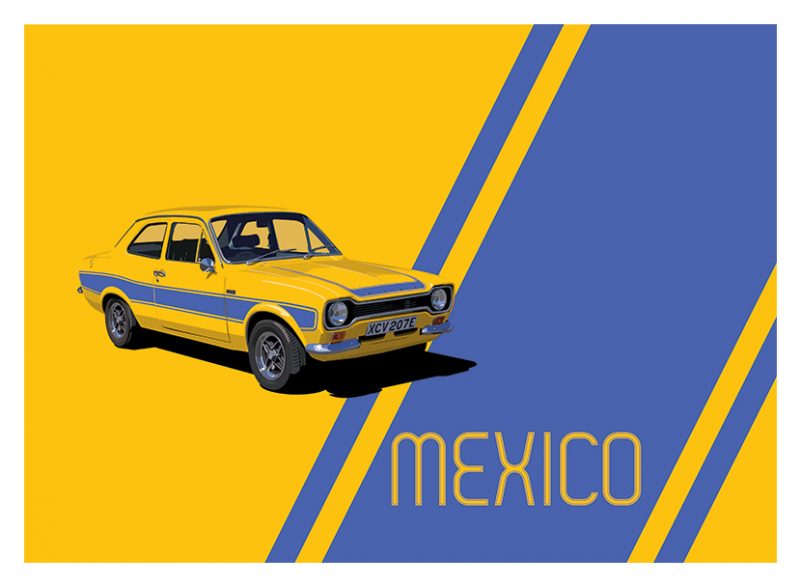 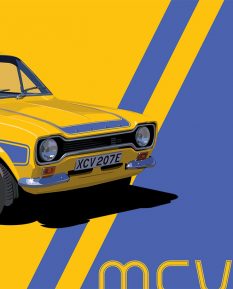 Art Prints  by Chris Hough
Starting from $ 20. Continue to Sizes

This Ford Escort Mexico art is bringing us at a time when the GTI-makeover of regular cars was nonexistent yet. But it was among the first GTI predecessor. Let us explain, back in the late 60s and early 70s, there were a lot of so-called halo modifications – sports models bringing motorsport technologies to the mass market. Ford Escort Mexico was a class bellow the halo cars. It was more affordable than Ford Escort RS1600, hence less powerful. More importantly, it drove as good as the rally-bred RS version of the first European Escort. Pure joy.

The story of the Ford Escort Mexico is pretty impressive. Back in 1970, a London – Mexico rally was held. It was dedicated to the capitals hosting the World Cup in 1966 and 1970. The rally was won by Hannu Mikkola driving, yes, Ford Escort. The same Ford Escort RS also occupied 3rd, 5th, 6th, and 8th places. Now you can see why the Ford UK marketing team was eager to roll out an Escort Mexico modification as soon as possible.

It got some parts of the rally-bred version, except the engine. Instead of a Lotus-bred Kent engine, it got a more humble Kent pushrod production mill capable of not so inspiring 86 hp. Well, this doesn’t sound like much today, but an acceleration of 10.7 seconds was quite impressive, having in mind the Escort Mexico was quite affordable back in the day. It offered comfort, economy, and utility, but it could also provide a ride on the wild side. Just like the Golf GTI and 205 GTI born a decade later.

This Ford Escort Mexico art is beautifully created by Chris Hough and we are happy to make it available for you at prices as low as $20. Let the shine of this yellow Mexico make your days brighter!