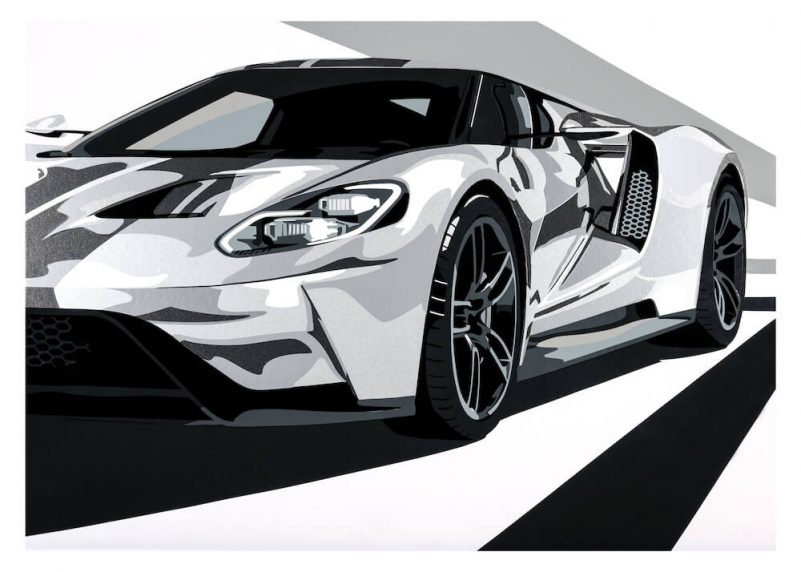 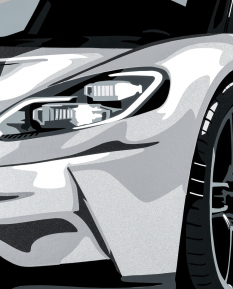 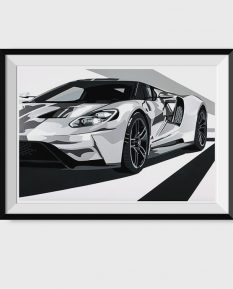 This Ford GT poster will make your walls swish and roar. It is an artistic reminder of the Ford Motor Company domination in the 24 Hours of Le Mans during the 60s. In this decade the company launches one of the most remarkable cars in the racing world, the famous GT40. Just a few years later the car makes a 1-2-3 win at Le Mans. It leaves spectators and automobile experts in awe.

The racing DNA of Ford

While the second version of the legendary car, the GT from the 2000s, is closer to the initial concept and design, the newest 2017 Ford GT is a bit more futuristic-looking and purpose-built. It’s a racing predator. Definitely closer to a race car than to a street stroller.

It’s made entirely out of carbon fibre. The rather unusual V6 (surprisingly, not the V8 we would all expect) powers the vehicle. The engine with forced injection is again behind the seats and is still with a small size because of aerodynamic issues. The engine is paired with a couple of turbochargers enabling its power output over 600 hp. This is a spectacular output from an engine we can also see in a Ford Raptor.

Soon after its launch, the 2017 Ford GT is again in its natural habitat - at La Sarthe circuit, which hosts the frightful 24 Hours of Le Mans competition. The new Ford GT makes a victorious Le Mans debut in 2016 by winning the GTE category. This is what we call a spectacular comeback!

Today, Ford GT is still in production but it does not mean anyone can buy it. There is a strict application and selection process and most candidates get rejected.