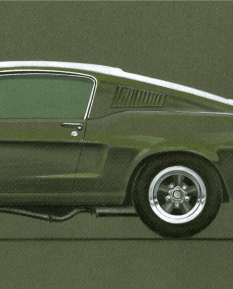 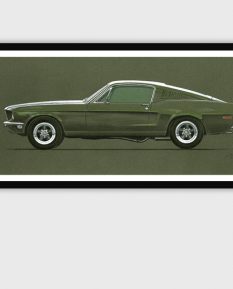 One of the most celebrated car chase movie scenes is the artistic inspiration behind this Ford Mustang art print. Maybe you are already a fan of the Ford Mustang GT Steve McQueen drives in Bullitt too. That's why this Ford Mustang Bullitt art print by Nicolas Cancelier is just for you.

The Bullitt movie is famous for its extensive use of actual locations. The car chase scene takes place on the streets of San Francisco`s Russian Hill and then continues on the highway. It ends with the Mustang forcing the Dodge Charger R/T out of the road into a gas station. The Bullitt director heavily relies on the then-new lightweight Arriflex cameras that allow greater flexibility in location shooting. That's what makes such a car chase scene possible back in the day.

The green Mustang Steve McQueen drives is actually a 1968 GT fastback model with a manual 4-speed transmission and a V8 capable of 325 hp. Two green Mustangs star in Bullitt. One of them is scrapped immediately after filming and a Warner Bros employee buys the other one. Steve McQueen makes a few attempts to locate this car and buy it but it looks as it disappeared into thin air. Ford considers the Mustang lost up until recently when it suddenly appears in a junkyard in Mexico. A local Ford expert who is actually looking for the next Mustang movie star – the Eleanor Mustang from Gone in 60 seconds, accidentally spots it. The VIN numbers confirm the authenticity of the Bullitt Mustang.

Celebrate the Ford movie star with this elegant Ford Mustang Bullitt art by Nicolas Cancelier. You can order it now at Simply Petrol marketplace.