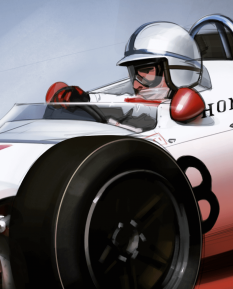 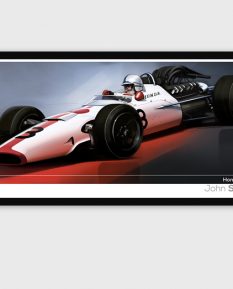 What you are looking at is one of the coolest F1 cars out there, the Honda RA300. Journalists popularise the nickname “Hondola” because the vehicle is a mutual project of the Japanese Corporation Honda Racing and the British race cars engineering company "Lola".

This car is intriguing not just with its driving characteristics or championship-winning stories but with its style. At first glance, you immediately notice its torpedo-shaped design. With its red stripes, the car reminds of a bloody arrow. The waterfall-shaped exhaust is situated right behind the driver's seat and on top of the screaming 48-valve V12.

The car is driven by none other than John Surtees, F1 World Champion and four-time 500cc motorcycle World Champion. Mr Surtees wins the race at Monza, the inaugural run of the RA300. This is the first and the last race that this car has ever won. On top of that, the finishing lap is the only lap that the RA300 has ever led in its entire F1 life-cycle. A record which stands today and will probably never be beaten.

This super realistic Honda RA300 art print created by artist Ivan Borisov can now be yours. Purchase your piece of automotive art at Simply Petrol marketplace.