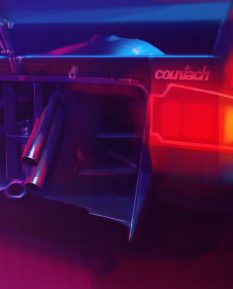 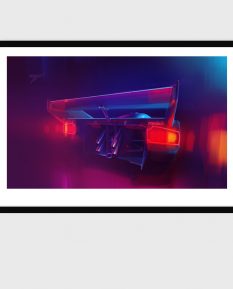 It is not the most beautiful Lamborghini nor the fastest one. It was the most striking of them all and let us be honest – it still holds this tag. This is why we are more than happy to share with you this particular Lamborghini Countach art, created by Artem Halko. A painting, dedicated to one of the most extreme automotive designs ever made.

The Countach story is more than exciting. It was conceived as the successor of Lamborghini Miura, the first supercar ever made. The design was assigned again to Bertone, where the young Marcelo Gandini has worked for the Miura project too. He penned nothing less than incredibly beautiful sculpture which latter will impact the shapes of 70`s and 80`s supercars. The long and attractive Miura curves were gone, replaced by striking and edgy lines.

Lamborghini Countach was significant with the fact that it was a modern car having nothing in common with ergonomics. During its 16 years production life, Countach evolved from just an edgy shape to a beast equipped with vents, spoilers and wings. Add the scissor doors, which need a lot of space to be opened, and you got something truly spectacular and definitely hard to use. The funny part is when you have to go on the reverse, which is forcing drivers to sit on the door sill with the doors open to park due to lack of rear visibility.

We can be forgiving on this one because the Countach is genuine V12 supercar with longitudinally mounted mid-engine. Just like it should be. The transmission was installed between the engine and cockpit which gave extremely short linkages which improved the gear change. The sleek body of the initial Countach LP400 without the wing and the narrow tires enabled the first generation to be one of the fastest Countaches made.

Now you can have the pleasure of sharing common space with the extremal design of Marcelo Gandini by ordering this Lamborghini Countach art, beautifully created by Artem Halko and carefully issued by Simply Petrol.