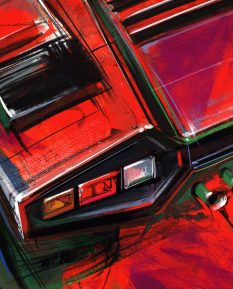 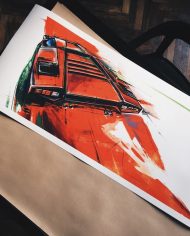 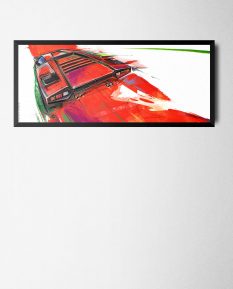 Here's to the ultimate '80s automotive poster queen – Lamborghini Countach. Its athor is Marcelo Gandini who is also the designer of the superb Lamborghini Miura.

When Bertone presents the concept version of Countach at 1971 Geneva Motor Show,  it just overshadows the iconic Miura. Lamborghini Countach looks like something out of a science fiction film. That’s why pop culture celebrates the car with appearances in movies and TV shows like Cannonball Run, Miami Vice, Rain Man, etc.

Countach is the first production car with scissors-like doors, famous today as Lambo Doors. The car is also unique with its NACA ducts that cool the rear brakes and engine - just like in a plane. Later the same ducts appear in Ferrari, including the legendary Ferrari F40. Lamborghini Countach is also spectacular with its unusual glazing, especially the rearview glass.

The Countach drivetrain is pretty unusual too. Its engine is longitudinally mounted in front of the rear wheels and points backwards because of weight distribution purposes. The solution pays off – the mass distribution is just perfect with 49/51 front to rear.

The Miura 4-litre V12 powers the first production Lamborghini Countach cars. Later the displacement increases to 4.7 L, then to 5.2 L with four valves per cylinder. During its lifespan, the power output is between 370 and 758 hp for the Countach LP Turbo S version.

During its 16 years of production life, Lamborghini manufactures slightly more than 2000 examples of the car. More than half of them was made in the five final production years, due to the management decision to increase Countach output.

Now you can own this alluring car art by Ilya Avakov inspired by the cult classic Lamborghini Countach. Order it now at Simply Petrol marketplace.