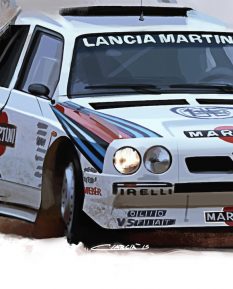 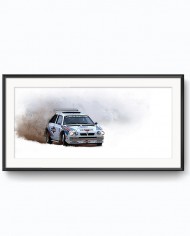 This art print features the Lancia Delta S4 - true rally villain, brute car  known as the machine responsible for Group B ending.  It happened when Henri Toivonen and his co-pilot died in a crash with a Delta S4 at 1986 Tour de Corse. They say that Toivonen wasn’t in his best shape since he was suffering from flu at the moment. The car burst in flames after the crash leaving no chances for survival.

The S4 was sophisticated contender using a combination of supercharger and turbocharger for 550 hp, derived by mid-mounted 2 liter, 4 cylinder engine. Unfortunately this car contributed for just five of the 75 WRC wins of Lancia Rally cars. Now you can own this Lancia Delta S4 on a snowy terrain by Sebastiano Ciarca.