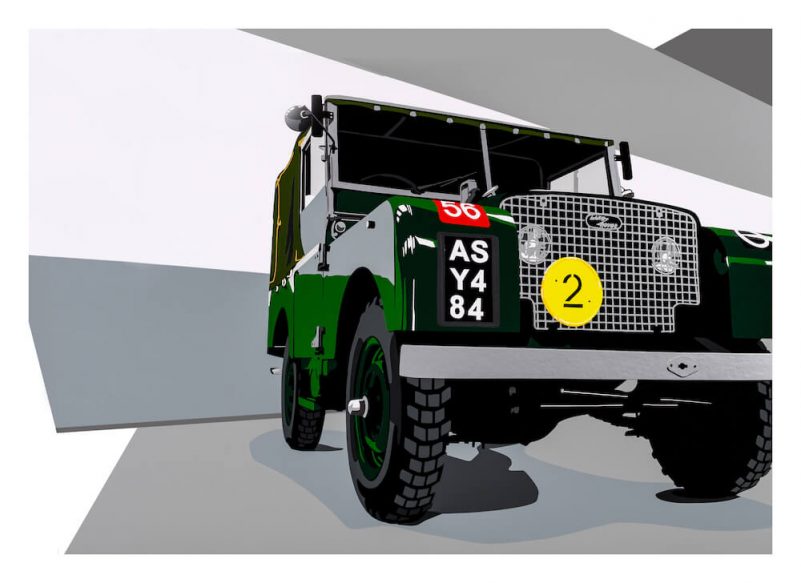 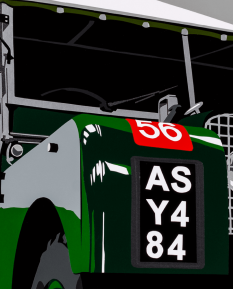 Who would guess that the luxo offroading will popular today built its credentials on the chassis of a Willis Jeep, with a center steering wheel and an agricultural application in mind. This Land Rover Series art print is beautifully telling the story of a genuine British icon.

When the WWII was over, the British islands were not full of resources and demand for luxury cars, which built the core business of Rover Company. Maurice Wilks, the chief designer of Rover back in the day, came up with a plan for light vehicle filling the gap between the personal transportation unit and agricultural tractor. Something just like the Unimog which was created in post-war Germany.

Land Rover Series I was among the very first signs of postwar recovery in England and it left its mark on the automotive in a pretty unexpected way. During the decades, the rough, leaf-sprung 4WD vehicle able to power drill-plow somehow set the foundation of the luxury off-roading in a quite spectacular manner. That is why this Land Rover Series I art is not just a romantic recollection but also a tribute to an icon.

The production of the Land Rover Series started in 1948. Originally it was powered by 1.6-litre petrol engine producing 51 hp. It relied on an unusual 4WD system with a freewheel unit which disengaged the front axle from the manual transmission on the overrun, allowing a form of permanent 4WD. It was a basic vehicle with door tops and roof as major entries within the options list. You`ll recognize the initial design by lights guarded behind the front grille. After 1950, they were left to do their work without the interference of a meshwork.

The car was built as 2 and 4-door off-road vehicle and a 2-door pickup. Soon after its launch became clear that there is a demand for more luxurious version. In 1949 a Station Wagon option became available with a body built by Tickford, a coachbuilder known for their work with Rolls Royce and Lagonda. The leather seats, the heating, and the wooden body were expensive and the car felt under private cars category, which was heavily taxed back in the day.

This Land Rover Series art is created by Joel Clark with his unique technique of hand-cut vinyl. At Simply Petrol we are more than happy to give you an access to this exceptional fine car art in the form of spectacular car print, created by a truly sensational artist.