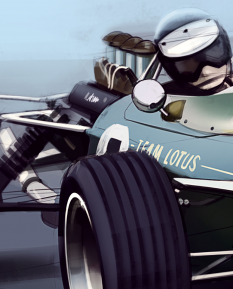 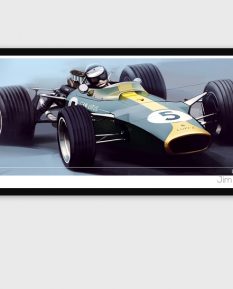 Think of F1 and car art. If you are an enthusiast, chances are you recalled this car, the Lotus 49, painted in British racing green with the yellow stripe. This car is legendary on so many levels. We could compose three separate books on it: one on engineering, one on design and one on history. That is why we are more than delighted to share with you this Lotus 49 art.

This Lotus 49 art is telling the quintessential F1 story

This car was designed in 1967 by Colin Chapman and Maurice Philippe, all legends in the world of F1. This car was the first one to successfully incorporate a chassis, which used the engine as a stress-bearing structural component. It did it so well that everyone else started following Lotus’ footsteps. The Lotus 49 was also the first car to use aerofoil wings; at first, directly mounted to the suspension, several feet above the vehicle. But after some mishaps and dangerous accidents, they were banned, and Lotus was forced to attach them directly to the bodywork.

The engine itself is a piece of automotive art, the Cosworth DFV, aluminium V8. From the very beginning of its life, the engine was producing 408 bhp and grew to 510 bhp towards the end of its lifespan. It has powered more cars on the F1 grid than any other engine in history (do not quote us on this, but it sure feels like it).

This car, as promised, includes some impressive racing history. The car debuted and won its first race during the Dutch Grand Prix, piloted by none other than Jim Clark. In total, the car has won 11 F1 Grand Prix's, including one, in its final year (1970). It's been driven by a very impressive line-up of drivers such as Jim Clark, Graham Hill, Mario Andretti and Emerson Fittipaldi. Hill even won the F1 world championship in it.