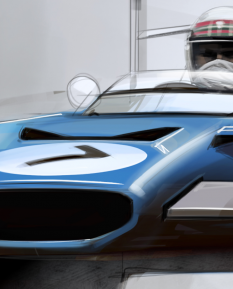 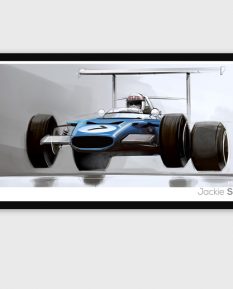 Matra is not a name that resonates as much as Ferrari or Mercedes with the current generation of F1 fans. The MS80 was not considered an eye catcher either back in the day, and we doubt too many kids had posters and other car-related art of it hanging on the walls. It has this quirky French look to it; starting with the color, going to the duck-shaped front end and the weird air ducks all around. But for a true F1 fan it does ring a bell or two and definitely looks beautiful after we’ve had 40+ years to look at it. This Matra MS80 art is full of automotive gorgeousness and is telling a beautiful and French F1 story.

The Matra MS80 joined the grid in 1969. It was a completely new car compared to the outgoing MS11, designed by Gérard Ducarouge and Bernard Boyer. The car was one of the first to sport a wing to increase the grip on the back tires during high speed. The fuel cell of the car was also moved from behind the driver to the side panels. The front suspension had a complete replacement, going from rocker arms to outboard springs with a parallel link to the rear suspension. Jackie Stewart himself has referred to MS80 as the nicest-handling F1 car he had ever driven. Big praise from a driver like Jackie.

The famous Cosworth DFV V8 engine powers this French beauty. At this point of its life cycle, the engine was producing 420 bhp. We will not go into any further details about it, because of how famous the engine is and how much we have talked about it previously.

Now, about the car's achievements. It won its inaugural race in 1969 at the Spanish Grand Prix, with Jackie finishing 2 laps before the runner-up. This was one of the two occasion such thing has ever happened. The car brought Jackie 5 victories that season and earned him the title of F1 World Champion. Given the fact that the car was a complete redesign, raced for only one season, won the first GP and landed its driver an F1 title, we think the French very well deserve a round of applause and admiration for this achievement.