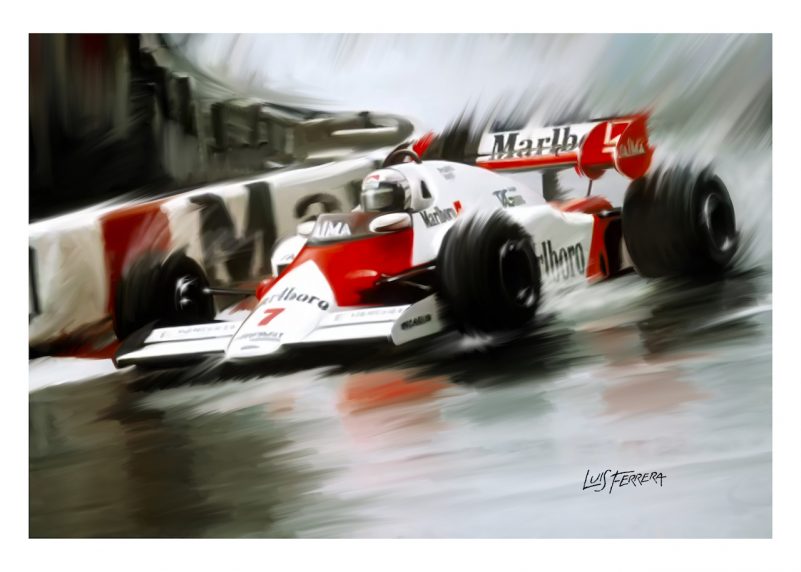 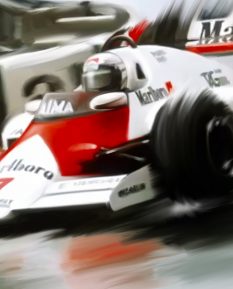 Artist Joel Clark gets his artistic inspiration for this F1 McLaren art print from the start of one of the most significant GP competitions. A few important things happen - the star of Ayrton Senna begins to rise in F1 and Steven Bellof makes a significant impact on racing history. Also, both McLaren MP4/2 and the TAG-Porsche engine get the first Monaco GP pole position and Alain Prost scores his first out of four victories at Monaco GP.

It's not the end, it's the beginning

The competition starts 45 minutes later due to bad weather conditions and heavy rain. Prost manages to keep his first position for a while but Nigel Mansell leaves him behind. An interesting fact is that this is the first F1 competition for Mansell. Unfortunately, he leaves it after a collision.

This is the moment when the underdog racer of Toleman-Hart with driver Ayrton Senna jumps in the game. At this time Senna is on the 13th position and is just starting to show his legendary driving skills on wet surfaces.

But Senna isn’t the only opponent for Alain Prost and his McLaren MP4/2. Here is also the young and promising Stefan Bellof who drives the only naturally aspirated car. He gets the third position and quickly narrows the distance between him and Senna.

At this moment Prost waves his hand as a sign to the stewards to stop the race because of bad driving conditions. He gets passed by Senna and his Toleman-Hart but the victory still goes to him. He is the one leading the competition at the lap before the end of the competition.