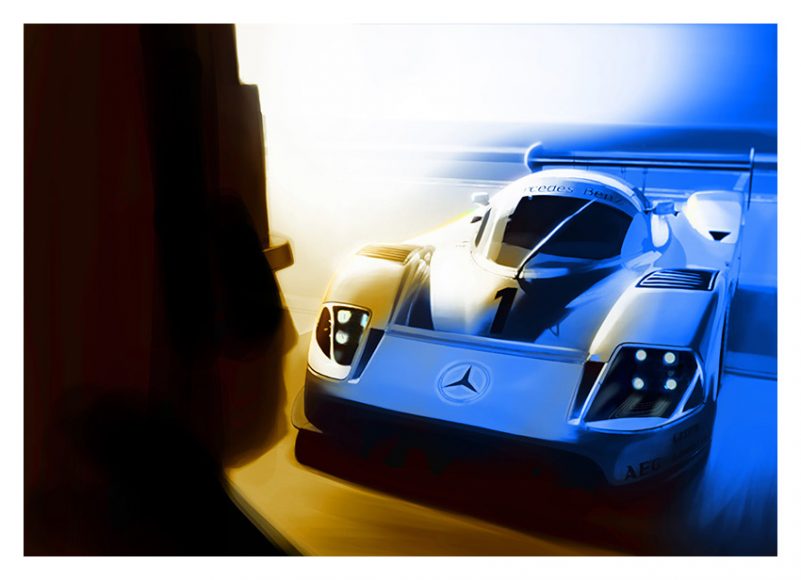 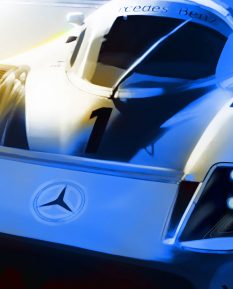 This Mercedes-Benz C11 art is about a racing car that arouses everyone around. Marco de Toma's illustration is inspired by the famous Group C prototype which reveals to the world the talent of Michael Schumacher. This particular vehicle also lays the foundations of the brand's return to F1.

The long-awaited return of Mercedes

This car is the first Le Mans racer that wears the three-Pointed star after the 1955 tragedy. Just like its predecessor C9, it is built in partnership with Sauber and with full access to the engineering knowledge of the Stuttgart's giant.

The results are tremendous. It wins the 1990 World Sports Prototype Championship with Mauro Baldi and Jean-Louis Schlesser. The same Frenchman who later wins the Paris-Dakar rally with a 2WD buggy designed by himself. Among the five pilots who race Mercedes-Benz C11 is the young Michael Schumacher, who has been pulled out from Formula 3. Undoubtedly, the dominance achieved by Mercedes-Benz C11 pave the way to the three-pointed star return in Formula 1.

The C11 has a carbon fiber chassis and a mighty 5.0-liter twin-turbo V8 engine. With a weight of under 900 kg and around 1000 hp in qualification mode, it is two seconds faster than any other car in the qualifications. If the C9 just outruns its opponents from Jaguar, Nissan, Toyota and Porsche, the C11 hammers them into submission.

Mauro Baldi rates the car as “probably the best prototype I ever drove” and “the only one of the cars from my career that I ever wanted to own”. He says that C11 gives the pilot the feel of a F1 car. We can`t do anything but trust him.

It's an honour to share with you this Mercedes-Benz C11 art, created by Marco De Toma. It's now offered in gallery quality Hahnemuelle paper or photo matt paper.