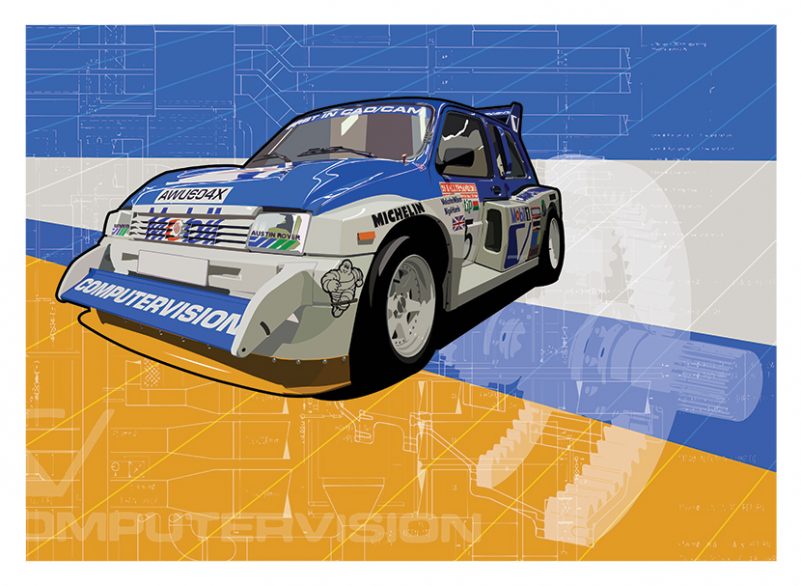 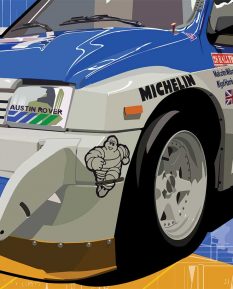 Art Prints  by Chris Hough
Starting from $ 20. Continue to Sizes

In a typically wet day in February 1984, a few people were gathered together in front of London's Excelsior Hotel.  Almost all of them were automotive journalists invited to watch a film of a prototype undergoing testing. As the film reached its climax, a real car burst through the movie screen. It was an MG Metro 6R4 with Tony Pond behind the wheel. This was the debut of the Austin Rover Group B program. An effort which was cursed with plenty of bad luck but though kind of successful. This is an amazing car with an interesting story behind it. That is why we are more than happy to share this MG Metro 6R4 art with you.

When Group B regulations enabled car brands to build rally cars with almost no limits and small build numbers for homologation, it attracted names like Audi, Lancia, Peugeot and Ford. Well, Austin Rover also wanted to join the action, and a couple of years later, they were (almost) ready with their pretender. MG Metro 6R4 was designed around space frame equipped with mid-engine and 4WD. The main engineering work was performed by Williams F1 Team, sponsored at the time by Austin Rover.

Unlike all Group B contenders, MG Metro 6R4 relied not on a 4-cyl turbo engine but naturally aspirated V6. The logic behind such a decision is the lack of turbo lag, which was a common issue. The V6 engine itself was derived by Cosworth DFV, designed back in the '60s with Formula 1 in mind. Lotus, McLaren, Matra, Brabham, March, Surtees, Tyrell, Hesketh, Williams, Lola, Ligier, and Penske are just some of the teams that relied on this design. Behind the driver of the MG Metro 6R4, it was capable of 400 hp good enough for 3.2 acceleration from 0 to 60 mph.

The Group B pocket rocket won its first start, the Gwynedd Rally, in 1985. A little later, MG Metro 6R4 finished third in the Lombard RAC rally with Tony Pond behind the steering wheel. So close to the 1-2 finished Lancia Delta S4 beasts. The British Group B contender displayed itself as a promising racer, but it wasn't quite like such. Unfortunately, its engine was its Achilles' heel, and due to mechanical issues, it wasn't durable enough to finish longer rallies. Until the problem was solved, the entire Group B was canceled after the death of Henri Toivonen in 1986.

This is how a promising racing car became obsolete. A year later, Austin Rover pulled out of motorsports and sold its stock of 6R4s at an extremely heavy discount. The engine design was sold to TWR and later appeared in a 3.5 V6 form in Jaguar's Group C racers and the XJ220 road-legal car.

Now we are happy to share this MG Metro 6R4 art with you. It is beautifully designed by Chris Hough and we make it available for you and your place at prices starting as low as $20. Because you know, we all need some big things in small packages in our lives, and this poster is delivering.