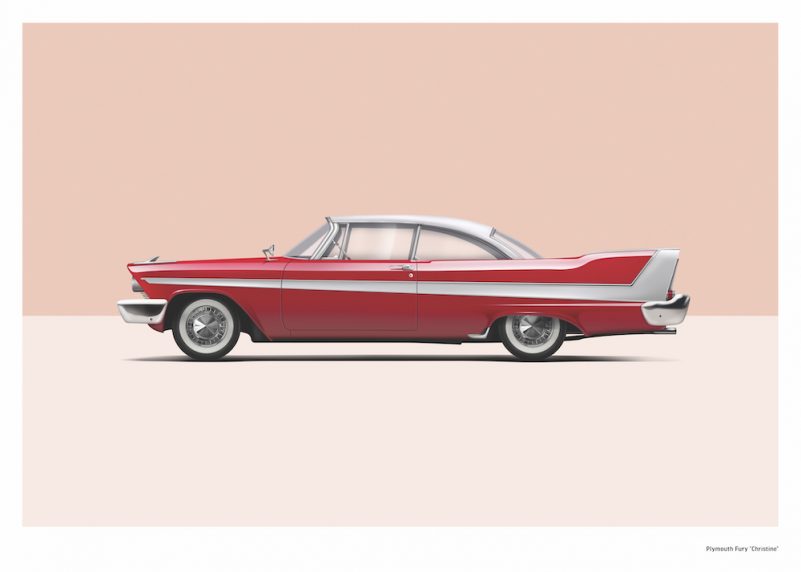 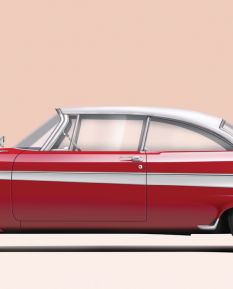 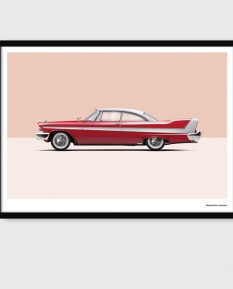 We cannot recollect a movie in which the car is the main character. A car with its own soul and mind. A car devilish like nothing before. A car that is killing people on purpose. A car participating in frightening love triangle. Meet Christine, a 1958 Plymouth Fury in red and ivory trim. Vehicle that became famous thanks to Stephen King novel Christine. It was time when it scared us a lot. Today we are happy to share with you this sleek and minimal Plymouth Fury “Christine” art print.

Stephen King once said that he picked Plymouth Fury as the main character of Christine because the model name emitted intense anger. During the shooting of Christine, 24 cars in total were used. The movie producers placed ads across the States to buy 1958 Plymouths. Along with the real Furys, they bought some Belvedere and Savoy models, painting them red and white. If you look closely, the “Fury” model designation is missing from the tailfins where it should be. Probably most interesting aspect of “Christine” Plymouth story is the fact that model year 1958 didn’t offered red on white color scheme.

This particular Plymouth Fury was part of the so-called “Forward look”, created by Virgil Exner – one of the greatest Americans in the car design. His motion like shapes were so good it forced GM to change the bodies of all of their cars for the next model year. On top of this, Plymouth Fury was definitely a fast car. Equipped with 350 V8 engine (available for the first and only model year), Fury was capable of acceleration from 0 – 100 km/h in just 7.7 seconds. Way faster than competitors like Chevrolet Impala and Ford Fairlane. Some of the engines were even equipped with electronic injection by Bendix but they proved unreliable forcing Plymouth to replace them with two 4-barrel carburetors.

This sleek Plymouth Fury “Christine” art created by Dziugas Valankauskas is beautifully telling the scary movie story of strange love triangle. Now you can make it yours as flawless art print, carefully issued by Simply Petrol.