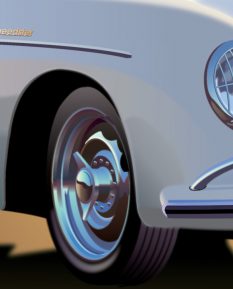 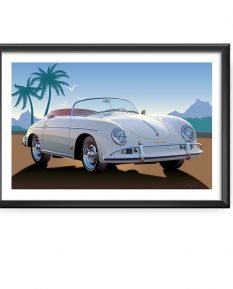 Max Hoffman is a New-York based importer of luxury European cars into the USA during the '50s. We owe him a great deal for sourcing some extremely spectacular cars like Mercedes-Benz 300 SL Gullwing, BMW 507 and Porsche 356 Speedster.

The public has been enjoying the 356 Speedster since late 1954. Porsche follows Mr Hoffman's advice that a lower cost, Spartan and open-top version of 356 has potential on the American market. Especially in Southern California. What can be better than driving an affordable open-top German sports machine on the Pacific Coast Highway in Southern California?

The car starts its life as a modest version of an established sports machine. Now it is a desirable classic with prices going easily above $150000. Back in the days, 356 costs more than $4000 which is the price of a brand new shiny and big Cadillac. The Speedster comes with a lowered windscreen, bucket seats, optional hardtop. It is an instant hit for just $2995.

Today, the Speedster version with the more powerful Carrera engine is among the most desirable classic Porsche 356s. There are only 140 examples of this car.

At first, Porsche 356 Speedsters have 1500 cc, SOHC, air-cooled flat-four engine breathing through a couple of Solex carburettors delivering 70 hp. A year later, the new 356 A version can brag with a more powerful engine.

Driving an insanely simple and well-engineered German sports car actually can be very inspiring. This Porsche 356 Speedster art print by Terry Smith is an embodiment of the SoCali style and is all about easiness and good mood. Order it now at Simply Petrol marketplace.