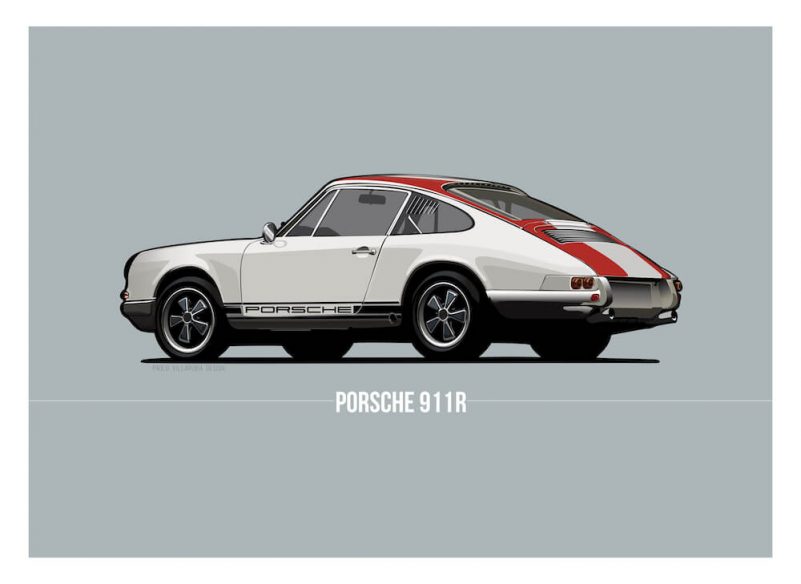 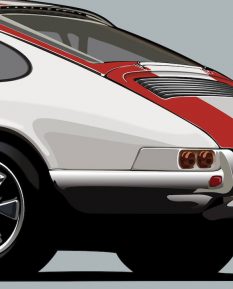 Art Prints  by Paolo Villarubia
Starting from $ 20. Continue to Sizes

It smells of petrol, asphalt and hot brakes. It tells stories of historic races, victories and speed records. The R in its name stands for racing. It is also the first-ever racing version of Porsche 911. Meet the extraordinary Porsche 911 R which still is the lightest 911 ever built.

The story of 911 R begins with Ferdinand Piëch, the nephew of Ferdinand Porsche. He is the head of R&D at Porsche at the time and his goal is to create a true racing car based on the 911 model.

Ferdinand makes that possible with the help of the racing mechanic Rolf Wütherich. They start with weight reduction and reduce every unnecessary gram. They remove the sound insulation, the glass windows, the metal body panels. Only the steel bodyshell remains. Also, every metal part is drilled like Swiss cheese in order to save more weight. The mechanics swap the inside door handles with simple plastic straps to save a bit more weight. The rear lights of 911 R are different from the stock ones because they are a little bit lighter than originals.

This is what we call persistence. It leads to a weight reduction of 230 kg so the Porsche 911 R finally measures 800 kg.

The engine is the next important step in turning the 911 into a true projectile. The car's engine bay receives a 6-cylinder boxer used by Porsche 906 and 916 with 210 hp at 8000 rpm. It gives acceleration from 0 to 100 km/h in just 5.9 seconds and can cover a one-kilometre distance from a standstill in just 24.2 seconds. This is one second faster than Porsche 904 Carrera GTS and five seconds faster than the iconic Alfa Romeo GTA!

To even put the car into racing, Porsche needs to produce at least 500 examples of it. Bookkeepers say it is impossible - the price is 45,000 DM, almost double the price of 911S. Unfortunately, only 19 vehicles are created and Porsche 911 R doesn't get the GT homologation it deserves. That’s why it was raced mainly as a rally car and also as a prototype.

This exciting piece of Porsche history comes as a Porsche 911 R art print by artist Paolo Villarubia. You can order it now at Simply Petrol marketplace.