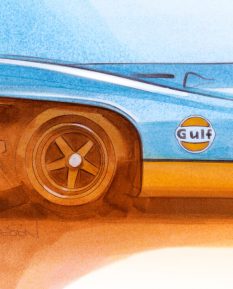 Is it the strange shape or the breath-taking power features? Maybe it's the striking blue and orange livery? We can't say for sure what makes our love for Porsche 917 Gulf poster art that strong. We always have a place in our hearts for one more Porsche art piece. This one is created by the talented Jochen Paesen.

This Porsche 917 Gulf poster is nothing but captivating

The Porsche 917 story is one of the most interesting automotive tales ever told. Porsche progresses steadily at Le Mans, but they lack both the funds and the technology to join the top tier competitors like Ferrari and Ford. The 917 project is possible only thanks to the contradictory business magnate Ferdinand Piech. Later on he takes the blame (less or more) for the VW diesel mishaps.

Back in the late '60s Mr Piech secures 2/3 of the project funding as payment from VW. He is willing to promote their air-cooled engine. But it's the absolute excellence of the Porsche engineers that makes 917 successful. With less than ten months to go before the 1969 24 Hours of Le Mans race, Porsche sets out to design the new vehicle. This project represents the most significant step in their racing history and no design or engineering mistakes are allowed at any stage.

Unfortunately, Porsche 917 doesn't work as well on the racing track as planned on the drawing boards. The car is extremely unstable at a high speed and a driver loses his life at 1969 Le Mans competition. The following 1970 season turns out to be not just victorious but also glorious for the Porsche team. During preseason tests, the engineers of JWA Gulf Racing discover that a 917 Can-Am has significantly better handling thanks to its short tail. Porsche picks up on this golden idea and produces a bunch of new and shortened tails. The Kurzheck or Porsche 917K begins its glorious life.

It is Steve McQueen who sends the vehicle among the car stars. Porsche 917 Gulf #20 makes a major appearance in his epic Le Mans movie. Now we have the pleasure to share with you this Porsche 917 Gulf #20 poster, created by Jochen Paesen and skilfully printed by Simply Petrol.