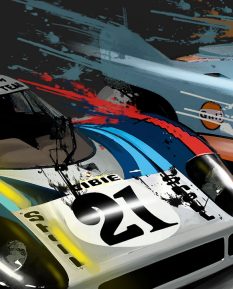 We love all 917s but Porsche 917 Gulf and Porsche 917 LH Martini livery have a special place in our hearts. The Martini Porsche 917 #21 in this poster by Michal Wojtaszek is the first vehicle that breaches the 150 mph average speed at Le Mans.

The abbreviation LH stands for Langheck which is the German for long tail. The longer overall shape of the car makes it more stable at higher speeds. This is perfect for the long Mulsanne Straight in Le Mans.

“I fell in love with the 917 when I went to the auto show at Geneva in March [1969]. It was upon the pedestal, it was big and gorgeous, a wonderful car, and I immediately fell in love with it. I then started lobbying Piëch to have one for Le Mans,” Vic Elford says in an interview. In the 1969 edition of Le Mans, he partners with Richard Attwood behind the wheel.

Unfortunately, the car retires after racing for 21 hours straight and being at first place, six laps ahead of the second. The reason is split housing. A year later, the very same car is steered again by Elford but this time in a team with Kurt Ahrens.

In the qualifications Ahrens sets the quickest time with 3:19.8 min. He averages 150.798 mph. This is a record which stands for several years. Unfortunately the 917 LH isn’t able to finish again. This time because of inlet valve failure. Today, this car is part of the Porsche Museum Exhibition.

The Porsche 917 #20 with chassis No 024, covered with the Gulf racing colors is the car featured in the Le Mans movie by Steve McQueen. In it Steve McQueen crashes his Porsche 917 Gulf #20. In reality they used a Lola in Porsche clothing. Later he continues to race with Porsche 917 Gulf #21, in which he crosses the line to take second place after a wheel-to-wheel battle with his Ferrari rival.