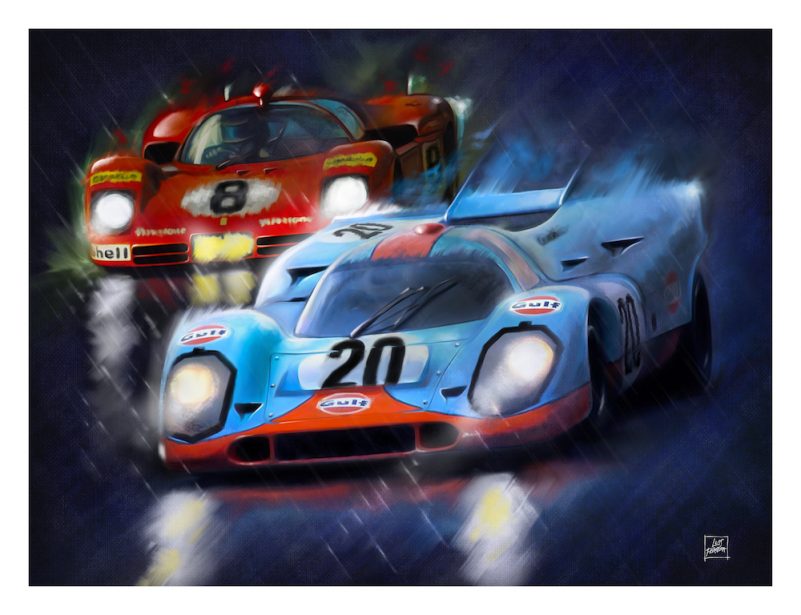 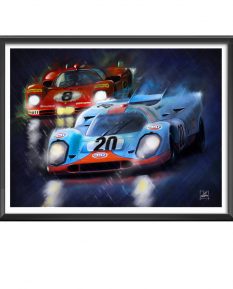 The duel between Porsche 917 and Ferrari 512 M is the story of the fastest Ferrari in history. Sadly it is also the story of a Ferrari that has no chance against the Porsche 917 beast in 1970 and 1971.

Back in the late '60s, Porsche is still an unexperienced manufacturer. They invest everything in the development of the purpose-built prototype racing car. Porsche creates the vehicle according to the new Group 6 homologation rules laid out by the C.S.I. (Commission Sportive International). This risky decision turns out to be a super successful one.

The new rules from 1969 allow 6-liters cars to race as long as they are produced in a small homologation series of 25 production units. Ferrari quickly realize that they have no chance with the 3-Liter P4 and start working on its successor.

512 S makes its first public performance at a press conference in November 1969. The chassis is similar to the one in P4 with a semi-monocoque design. The engine is a direct development of the one used in Can-Am series. It now has twin overhead camshafts, four valves per cylinder and fuel injection made by Lucas. Firstly, 512s have around 550 hp but only a year later they level up the 918 performance with 620 hp at 9 000 rpm.

The Ferrari 512 S, that drives in the 1970 season, and its successor the Ferrari 512 M are among the most iconic Ferrari sports-racing cars. Ferarri is still the leading name in motorsport and they have the best drivers. Talents like Mario Andretti, John Surtees, Clay Ragazzoni, Jacky Ickx, Ronnie Peterson, Derek Bell are just a few of them. Their rivalry against the 917s is spectacular. The Ferrari is faster but the Porsche is more reliable. Who wins?

The 1970 race of Le Mans will be remembered. 24 hours of heavy rain, high-speed accidents, failures and broken dreams. All eyes are on Ferrari and Porsche teams. Both companies debute their new Group 6 homologated cars with 5-litre capacity earlier in the season. At the time of the race, in mid-June,  it is already clear that Porsche has better reliability and dominates the world tracks.

Porsche's racing program also includes a Long-tail (Langheck) version of their 917. The company's engineers create the vehicle specifically for the long straights and the maximum speed of Circuit de la Sarthe. Two 917 L enter the race. One of them is driven by Martini Racing team and the other one - by team Porsche Salzburg. The fact that Porsche strongly supports the Porsche Salzburg team comes as a big surprise for John Wyer, the Gulf Team factory director.

Ferry Porsche himself drops the flag. For the first time this year, the competition starts with all pilots seated in their cars. Seat belts are safely strapped as demanded by Jacky Ickx one year earlier.

There is such a thing as bad weather

Shortly after the start, it begins to rain. Up until 8 pm, the rain is very heavy and causes many accidents. The last Ferrari in the race, with drivers Shetty and Jacky Ickx, is sixth. Jacky does his magic behind the wheel and manages to bring the car to second place at midnight.

Later that night another accident injures fatally a corner worker at the Ford chicane. Jackie Ickx and Peter Schetty's Ferrari causes the accident. This is the last competitive Ferrari with a chance of winning. It is running second after the stunningly fast midnight stint of Jackie Ickx.

It is the #23 917K with drivers Hans Herrmann and Richard Attwood that takes the overall win. The Salzburg Short-tail (Kurzheck) 917 crosses the line ahead of the low-drag 917 L Hippie Car from Martini Racing with drivers Gerard Larrousse and Willi Kauhsen. The red 917 earns its place in history books as the first Porsche team that wins the famous 24 hours of Le Mans.

Only 16 cars make it to the finish line. Surprisingly one of them is the 917 with the filming gear for the "Le Mans" movie of Steve McQueen. Nine out of eleven 512s do not finish this year. Three factory and two private held 512 S vehicles retire due to engine failures.

You can now own a small piece of world's racing history with the Porsche 917 vs Ferrari 512 M - The Duel art print created by the talented Luis Ferrera. Fine car art is brought to you by Simply Petrol.