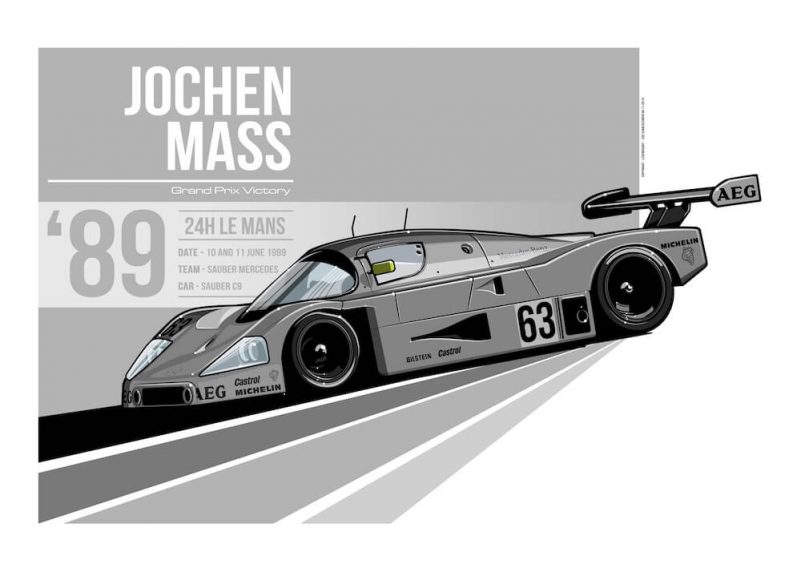 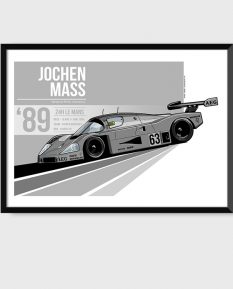 This Le Mans art print by artist Evan DeCiren celebrates Mercedes-Benz` come back at La Sarthe circuit. The Silver Arrows leave endurance racing after the Le Mans disaster in 1955 that takes the life of 84 and 120 more are injured.

Mercedes-Benz needs more than 40 years to start contributing to endurance racing again. They make their comeback with Sauber Mercedes C9. The Germans take the Le Mans victory in 1989 with drivers Jochen Mass, Manuel Reuter and Stanley Dickens behind the wheel.

The glory days of Group C would not be the same without the Sauber Mercedes racing cars. The C9 is an evolution of the C8 and it keeps its aluminium monocoque structure with changes in suspension, body, and engine. The power plant is M177 Mercedes-Benz V8 with two turbochargers and almost 800 hp at 7000 rpm.

The Sauber Mercedes C9 doesn't have immediate success. The car finishes only three races in its first 1987 season despite its obvious potential that Johny Dumfries proves with a lap record at Le Mans. The next year is way better but it is season `89 that turns the car into a legend by winning all Championship titles – Team's, Constructor's and Driver's.

Sauber Mercedes C9 wins all but one races from the calendar, including the gruesome Le Mans. Reaching 400 km/h during qualifying proves the car is among the fastest that have ever entered this competition. Only Peugeot P88 exceeds C9`s achievement by realizing a max speed of 405 km/h a year earlier.

Now you can own this piece of motorsports history turned into Sauber Mercedes C9 art by Evan DeCiren. Order now at Simply Petrol marketplace.