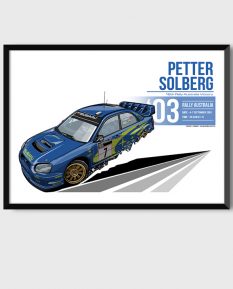 Subaru manages to move quickly from the position of a rather mediocre car brand to a worldwide famous manufacturer. This is due to its cleverly engineered cars with barking flat-4 engines and exceptionally effective AWD technology.

Subaru forms a partnership with Prodrive to enter World Rally Championship. This happens in 1989 when the Japanese create their Subaru World Rally Team. Their first attempt is with the Legacy RS but the car that brings them success is the smaller Impreza.

In 1995, Subaru World Rally Team signs a sponsorship deal with State Express 555 cigarettes brand. This gives them the distinctive blue and yellow racing livery, a trademark for Subaru WRC cars.

Petter Solberg and Tommi Makinen are the 2003 Subaru pilots. The season does not start very well and neither of them manages to finish Rallye Monte Carlo. Solberg compensates with three wins in a row in Cyprus, Australia, France and finishes the season with a win in Britain. He manages to win the championship title and beats Sebastien Loeb by just one point. Unfortunately, Subaru WRC Team does not get the constructor title as it lags behind by Citroen and Peugeot.

The success of Petter Solberg is secured by the extremely close work of Prodrive and Subaru. They are ready with the 2003 car just a few months after the official debut of the new Impreza at the Geneva Motor Show. The car is well-recognisable with its sectioned rear spoiler that features six vertical wings. A nice signature, isn’t it?

Now you can own this piece of motorsports history in the form of a Subaru Impreza WRC art print by artist Evan DeCiren. Order now at Simply Petrol marketplace.