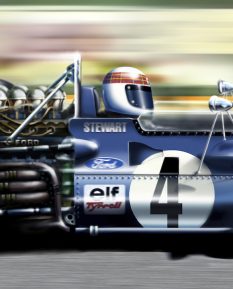 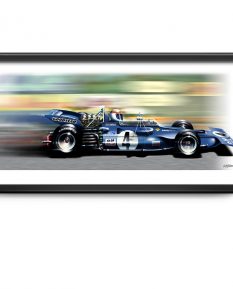 Everything starts in the late '50s when Ken Tyrrell realizes he`ll never be an exceptional racing driver. He decides to create a team of his own and to join Formula Junior. Throughout the years he participates in different Formula championships but the discovery of racing talents proves to be his strongest asset. He attracts stars like John Surtees, Jacky Ickx, Jackie Stewart. Part of his list are also Jean Alesi, Jody Scheckter, Jos Verstappen, Martin Brundle and Michele Alboreto.

Tyrrell 001 appears on the racing scene

Tyrrell 001 is born in pretty interesting circumstances. With the help of Ford and Elf, in 1968 Ken Tyrrell moves his team from F2 to the more prestigious F1 championship. This is possible thanks to the joint-venture between his team and the team of Matra, a famous French car manufacturer. The team achieves several GP wins and as a whole has a very successful debut season.

Things get even better in the following `69 season when Jackie Stewart wins the title. This is the first victory for a French team and also the sole win for a French chassis.

Trouble comes next season when Matra merges with Simca, which is a subsidiary of Chrysler. This means Tyrrell cannot use Ford engines because of their rivalry with Chrysler and the available then Matra engine isn’t good enough. This is what forces Ken Tyrrell to secretly start developing his first own car.

At the end of `70 season Tyrrell 001 makes its debut. Even though it cannot finish the last three competitions, the car achieves a pole position in the Canadian GP. This happens due to a few technical failures, one of them caused by a dog on the track of Mexico GP. The nearly identical Tyrrell 003 wins both Drivers' and Constructors` Championship in the following 1971 season. This is thanks to the outstanding performance of Jackie Stewart and Francois Cevert.