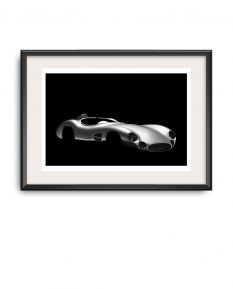 Photo Prints  by David Pisani
Starting from $ 22. Continue to Sizes

This sculptured magnesium body shell belongs to Aston Martin DBR1, the only Le Mans winner of the brand. Think of it as the artsy work costume for notable racing drivers as Sir Stirling Moss, Jack Brabham, Jim Clarck and Caroll Shelby, just to name a few.

Aston Martin DBR1 made it in racing history with its 8 wins, including 1959 Le Mans. The car benefited mainly due to changes to the rules of sports car racing where no longer entrants had to use road legal or based on road legal cars. This opened the door to dedicated racers designed from scratch. Aston Martin extracted benefits of the situation with lighter chassis and body shell and excellent engine, which appeared to be the last work of W.O. Bentley for Lagonda.

The car was extremely fast and set many track records but unfortunately – equipped with unreliable transmission. A sudden change in the regulations at the end of the 1957 season limiting the engine displacement up to 3-litres for sport prototypes, perfectly suited Aston`s DBR1. These changes left Jaguar D-Type, Maserati 450S and Lister-Jaguar Special obsolete.

In 1959 Aston Martin DBR1 won Le Mans with Caroll Shelby and Roy Salvadori behind the wheel, followed by Maurice Trintingant and Paul Frere in a DBR1 too. This 1-2 positioning is the top achievement of Aston Martin`s racing program and is good enough to credit them with epic heritage.

Now you can own this piece of sculpting art as photo print, created by David Pisani and shot with period correct camera, carefully produced for you by Simply Petrol.