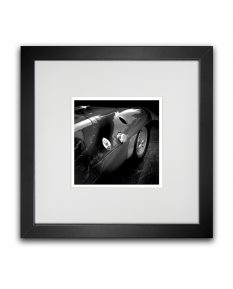 This photo artwork by David Pisani is telling so much by focusing on a simple group of details. Maserati Tipo 63 Birdcage is evolution of Tipo 61 and Tipo 62 which were with front engine layout. Tipo 63 switch to mid-engine layout and became one of the first Italian racing cars with this type of setting.

Most interesting in Birdcage series of Maserati racing cars is their tubular spaceframe chassis, designed by Giulio Alfieri. He relied on complex frame made of short and small diameter tubes welded together in something suspiciously similar to birdcage. Creating something like this makes you pretty good at space combinatorics and linear algebra. Applying such high level mathematics in Maserati Tipo 61, 62, 63 and 64 led to extremely light chassis and very small vehicle. In addition, it is easily modified. This way Alfieri`s team of engineers succeed to perform switching the engine layout from front to mid in a relatively tight schedule. Because of this, first numbers of Tipo 63 were equipped with 2-litre, 4 cylinder engines. Later it was replaced with newly developed V12 which was aimed for Le Mans win.

Even though Maserati Tipo 63 was advanced in many aspects, it wasn’t truly successful racing cars because of reliability issues, mainly drivetrain. The Tipo 63 Birdcage's were constructed for Cunningham, Serenissima, and Camoradi teams and driven by famous drivers such as Bruce McLaren, Walt Hansgen, Stirling Moss and Masten Gregory. This Maserati racing car is best remembered for its fourth place finish at the 24 Hours of Le Mans, driven by team Cunningham.

Now you have the chance to own this majestic piece of pure aesthetics and racing history as beautiful photo art print, created by David Pisani and produced by Simply Petrol.