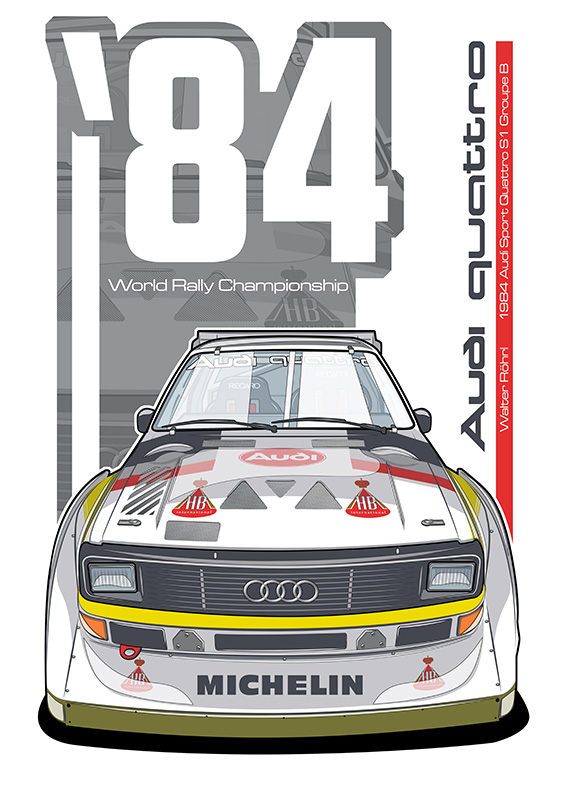 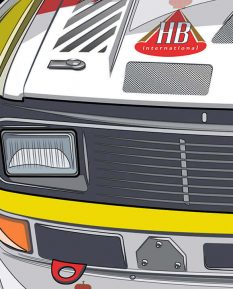 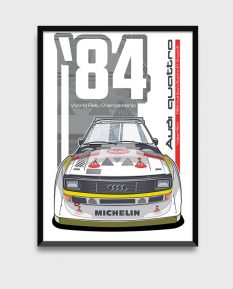 Poster Prints  by Evan DeCiren
Starting from $ 28. Continue to Sizes

It is in 1980 when 4WD cars enter rally championship. Audi Quattro is the game-changer that not only introduces 4x4 in rallying but also brings the first WRC win to a female driver. It is virtually impossible to exaggerate the impact of the Quattro on rallying. That is why we are more than happy to share with you this beautiful Audi Quattro S1 poster.

Inspiration from the Finnish winter

To a big extent, Audi owes its current premium look and feel to the Quattro technology. Its creator is the Audi engineer Jorg Bensinger who has the chance to drive a lot the compact VW Iltis during the Finnish winter. He notices that the small vehicle is a great snow driving performer gifted with perfect manoeuvrability.

Ferdinand Piech, the man who gives the Porsche 917 project the green light, once again proves himself as a visionary manager. He plays a major role in the Audi Quattro program approval.

Audi Quattro enters rallying and rocks its foundations with the innovation of the all-wheel-drive technology. The first Audi Quattro appearance in the Monte Carlo rally is an absolute sensation. Hannu Mikkola overtakes at the first special stage a Lancia Stratos that has a one minute earlier start. It quickly becomes clear that this is the beginning of a new automobile era.

Audi manages to dominate even the horrific Group B. This Audi Quattro S1 poster is dedicated to the rally racing car in its E2 version. It comes as an update to the Audi Sport Quattro at the end of 1985. It has a 2.1-litre, 5-cylinder engine capable of 500 hp+ due to a clever turbocharger that spins in high RPMs when the driver closes the throttle. This allows reducing the turbo lag once you go out of curve or shift gears.

The aggressive body kit aims to increase the downforce needed to keep under control a beast weighing just 1095 kg. Audi Quattro S1 can brag with legendary drivers like Michele Mouton and Walter Röhrl. Röhrl wins the Pikes Peak in 1986, the last year that Audi is officially presented in rallying.