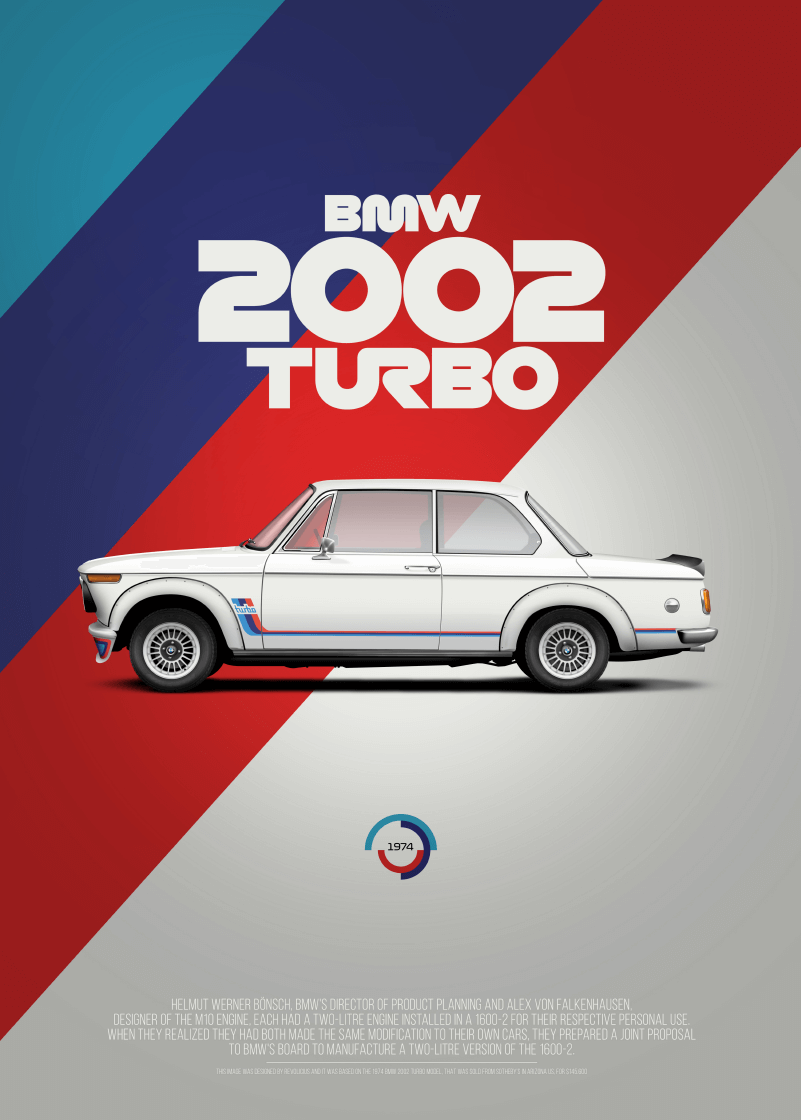 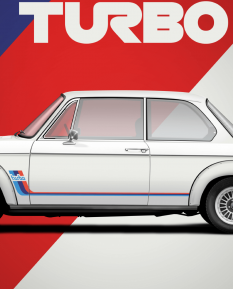 This BMW 2002 Turbo wall print tells the story of the Bavarian manufacturer's most crucial model. It is not only the imposing Turbo body of the car or its turbocharged engine that makes it special. The BMW 2002 Turbo is the car that secures BMWs presence across the pond and achieves the timeless status of a cool vehicle in the United States.

Preface for the mighty BMW 2002 Turbo

At first, it is the relatively affordable small BMW 1600 that dominates a good portion of the US market. At that time the stunningly beautiful Alfa Romeos and extremely nippy Datsuns are the most desired cars. The 1.6-litre 2-door coupe version of 1600 is believed to be a very good value for money. But its 4-Cyl engine with around 80 hp doesn't make the car feel sporty and the hotter version 1600 Ti never appears in the States due to emission standards. As always, this creates an opportunity too exciting to not be followed.

At the time both the Director of product planning and the Engine designer at BMW, independently of one another, swap their M10s with 2.0 motors. The same idea also occurs to the legendary European importer Max Hoffman. It is him who demands a more powerful version to satisfy the American market. Soon the 2002 model is introduced and everyone gets to know the real feeling of driving a BMW.

Let it be "turbo"

2002 is created back then when BMW is an underdog. Back in 1969, when the Rolling Stones, skinny ties and mini-skirts are the new normal, BMW races a turbocharged version of 2002. The turbo technology is in its early days, hence not as reliable as today. But its progress seems to be just enough for Dieter Quester to win the European Touring Car Championship.

The production version of the 2002 Turbo is introduced in 1973 and becomes an instant success. It relies on KKK turbocharger and the 1600 Ti's Kugelfischer injection, producing 170 hp. The light body of BMW 2002 means stellar performance. Once the throttle sends the crankshaft revs above 4000 rpm and the turbocharger goes live, the car becomes unstoppable.

In Germany, the BMW 2002 Turbo is not well-accepted by the German Road Safety lobby. They believe the power of the car and its looks encourage drivers to speed up, misbehave and act dangerously on the road.

To us, it's an hobour to have this beautiful BMW 2002 Turbo wall print by the artist Stamatis Tsirdimos in our collection. You can order it now at Simply Petrol marketplace as a gallery-quality art print or as a poster.