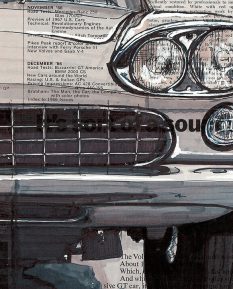 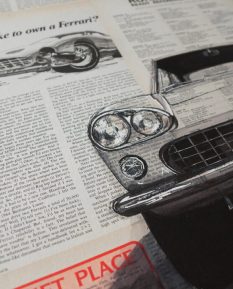 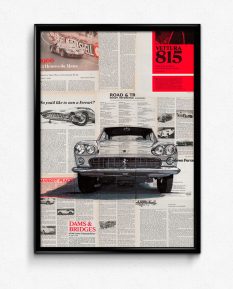 Have you ever wondered what is the car that John Lennon sings about in Baby you can drive my car from the eternal Beatles` Rubber Soul album? The answer is Ferrari 330 GT 2+2 Series 1.

John Lennon passes his driving test in February 1965 and the car he purchases soon after is a brand new Ferrari 330 GT 2. A few months later he writes the famous lyrics and Paul McCartney composes the song. It is a pretty sweet way to start your life behind the wheel, no doubt. And it can't be any different having in mind the V12 Colombo engine below the front bonnet. Just like the model family of 250, Ferrari 330 (built as 2+2 GT Coupe, two-seat Berlinetta, spyder and a race car) is a fabulous line of cars with glorious road-legal and furious racing incarnations.

Ferrari 330 GT 2+2 Series 1 is specific with its quad headlights, similar to those of Lamborghini 4000 GT released a few years after the 330 GT Series 1 debut. It is not a surprise that Tom Tjarda designs this Ferrari GT Coupe for Pininfarina. He changes the quad headlights for Series 2 facelift which distinguishes the car as the only Ferrari with such lighting arrangement.

Ferrari 330 GT is produced in 1099 numbers between 1964 and 1967. 625 of them are Series 1, the rest is facelifted. The car relies on Weber carburettors to release 304 hp at 660 rpm, enough for a maximum speed of 152 mph or 245 km/h. This GT Coupe has adjustable Koni shock absorbers and 4 disc brakes. Power steering and air conditioning are optional but the wooden steering wheel is a must.

Just like the rest of his artworks, Adam Ambro creates this one on old school print media. This time he chooses a Road & Track edition covering 1964 Le Mans. You can also spot a headline like “So you`d like to own a Ferrari?” which we find highly suggestive. You can order now your Ferrari 330 GT 2+2 Series 1 art print by Adam Ambro at Simply Petrol marketplace.