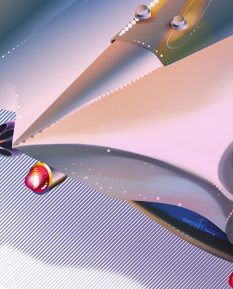 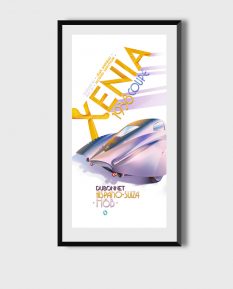 Designed by Jean Andreau, built by Jacques Sauoutchik and ordered by Andre Dubonnet, this Hispano-Suiza Xenia Coupe is one of the most exquisite examples of automotive art deco. W.Flemming is praising its unique beauty and bold lines with series of poster prints available only at Simply Petrol. That is why we are more than happy to present you this beautiful Xenia Dubonnet poster print.

This Xenia Dubonnet poster is nothing less than genuine Art Deco

Andre Dubonnet was an amazing aviator, racer, and inventor. He was the heir of Dubonnet aperitif firm which gave him the ability to create inventions of his own. Solar power is that one that almost made him bankrupt. In the automotive history, he is remembered as a man tempted by aerodynamics, which motivated him to commission some special aerodynamic cars to be built for him.

What saved Dubonnet was his suspension system of capsuled springs. He successfully sold his patents to General Motors, FIAT, Delahaye and Alfa Romeo but the system later proved to be prone to leaking and expensive to repair. Well, its life started way more glamourous by being implemented for the first time in the truly distinctive on-off Hispano-Suiza Xenia Dubonnet. This commissioned to Jean Saoutchik body gave avant-garde interpretation of the teardrop shape and was different from any other car produced back in 1938.

While the overall body is evocative of the elegant lines indulged in by coachbuilders of the Art Deco era, the details of this car are its truly Deco components. One exquisite feature is its door mechanism. Using a centrally mounted handle, the doors effortlessly slide open and backward, parallel to the body.

The Xenia was André Dubonnet’s personal car. It was hidden during World War II and did not resurface until 1946 when it led the parade celebrating the reopening of the Saint Cloud highway tunnel outside Paris to civilian traffic. Alain Balleret, president of the French Hispano-Suiza Club, purchased and restored the Xenia in the `60s. In 1999 the American Charles Morse purchased it at auction. Peter Mullin purchased the Xenia in 2003. Today it is owned by the Peter Mullin Automotive Museum Foundation.

Now you can own the silhouette of its pleasing lines as epic Hispano-Suiza Xenia Dubonnet poster print, beautifully created by W.Flemming and carefully issued by Simply Petrol.