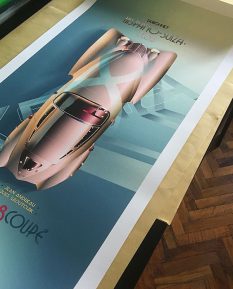 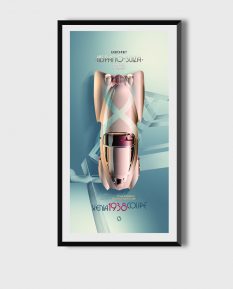 Welcome back to the poster show of automotive art deco streamlined cars beautifully directed by the unique art of W.Flemming. She is telling the story of not just epic European classics like Hispano-Suiza but also the story of Saoutchik sculptures and the Dubonnet inventions. Meet the one-off Hispano-Suiza Xenia Dubonnet, one of the most precious possessions of the Mullin Automotive Museum. Which, you have to know, has probably the most valuable automotive art deco classic car collections all over the world.

Hispano-Suiza was founded in 1904 by a Spanish businessman and a Swiss engineer. They build cars dedicated to rich and famous and the Spanish king Alfonso himself owned about 20 Hispano-Suiza cars. During WWI, the company made its living by building aircraft engines. They proved extremely successful and its aviation success influenced new car designs created by Hispano-Suiza after the war ending. The first such car was Hispano-Suiza H6 built between 1919 and 1933. The luxurious chassis had its sports version most notably piloted by Andre Dubonnet at Targa Florio and Boulogne races. Meanwhile, Hispano-Suiza H6 smashed eight international records, including 148 km/h average speed over 480 km distance at Brooklands.

Shift your focus to Andre Dubonnet. This is the man responsible for this particular one-off masterpiece of a car art like Hispano-Suiza Xenia Dubonnet. This rolling sculpture brings together avant-garde and aesthetics in one teardrop automotive shape. Andre Dubonnet, extremely gifted inventor ordered special Hispano-Suiza H6 chassis which aim is to display his new capsuled springs suspension. The body was ordered at Saoutchik`s coach building atelier and the accent was put on aerodynamics and aesthetics. He delivered as usual, creating one of the automotive art deco epitomes.

Now you can own a piece of its pleasing lines as epic Hispano-Suiza Xenia Dubonnet poster print, beautifully created by W.Flemming and carefully issued by Simply Petrol.