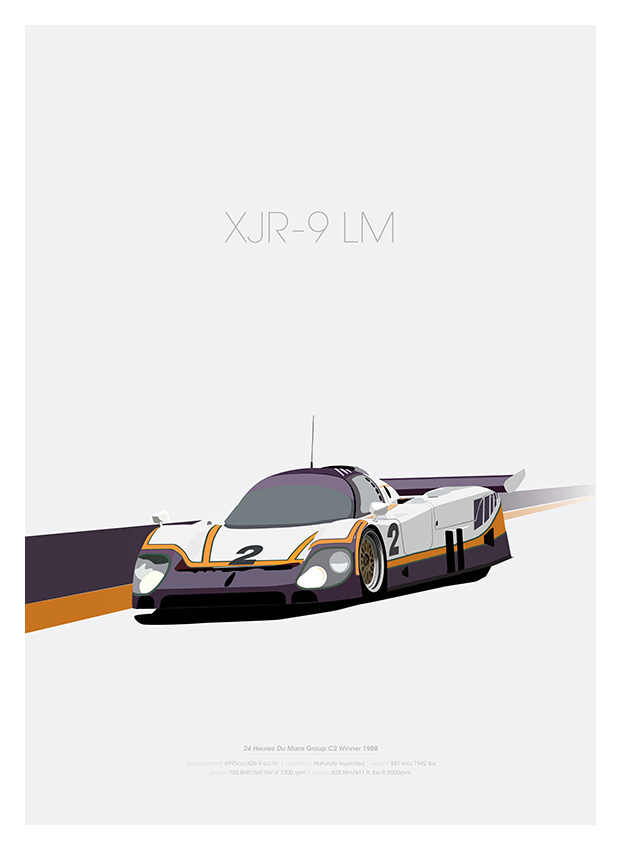 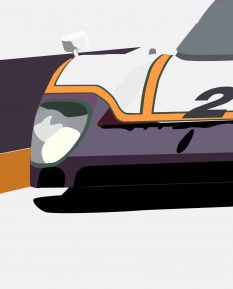 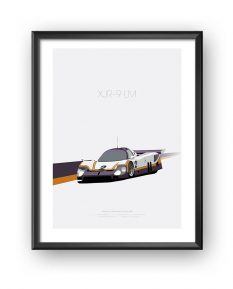 Jaguar D-Type has five wins out of seven Le Mans entries but this success comes to its natural end after season 1957 when the D-Type becomes obsolete. 30 years later, Jaguar enters endurance racing again. The company creates a batch of XJR racers and some of them became victorious. This Jaguar XJR-9 LM poster by Pete Dials is about the glory days of the British vehicle.

Jaguar XJR-9 debuts in 1988 at the 24 Hours of Daytona and takes the overall win. It is raced both as an IMSA racer and as an endurance prototype. The XJR-9 takes six victories, including 24 Hours of Le Mans over the eleven race series. Silk Cut Jaguar wins the Teams Championship and Martin Brundle gets the drivers title. Jaguar's success at Le Mans marks the first year since 1980 when Porsche does not win the 24 Hours of Le Mans and the first Jaguar`s victory since 1957.

The engine of the prototype is derived from the stock Jag`s V12 but with а raised displacement of 7 litres. Jaguar racеs five cars in total in the 1988 Le Mans competition. All of them hold the lead when the first car retires with transmission issues after eight hours of racing. Eleven more hours and one more of the Silk Cut Jags is forced to exit the competition after a head gasket failure.

Jan Lammers leads the race with one of the three surviving Jaguars when a transmission failure almost forces him out. Luckily, he notices this at the right time and continues to race on fourth gear to complete the race a couple of minutes ahead of the fastest Porsche. If Lammers has changed the gear just once, the transmission would die. This would prevent Jaguar from winning their sixth 24 Hours of Le Mans title. Great job for Jan Lammers who drives the winning Jaguar XJR-9 LM together with Andy Wallace and John Dumfries.

Feel the racing spirit of the Le Mans title with this minimalistic Jaguar XJR-9 LM poster by artist Peter Dials.