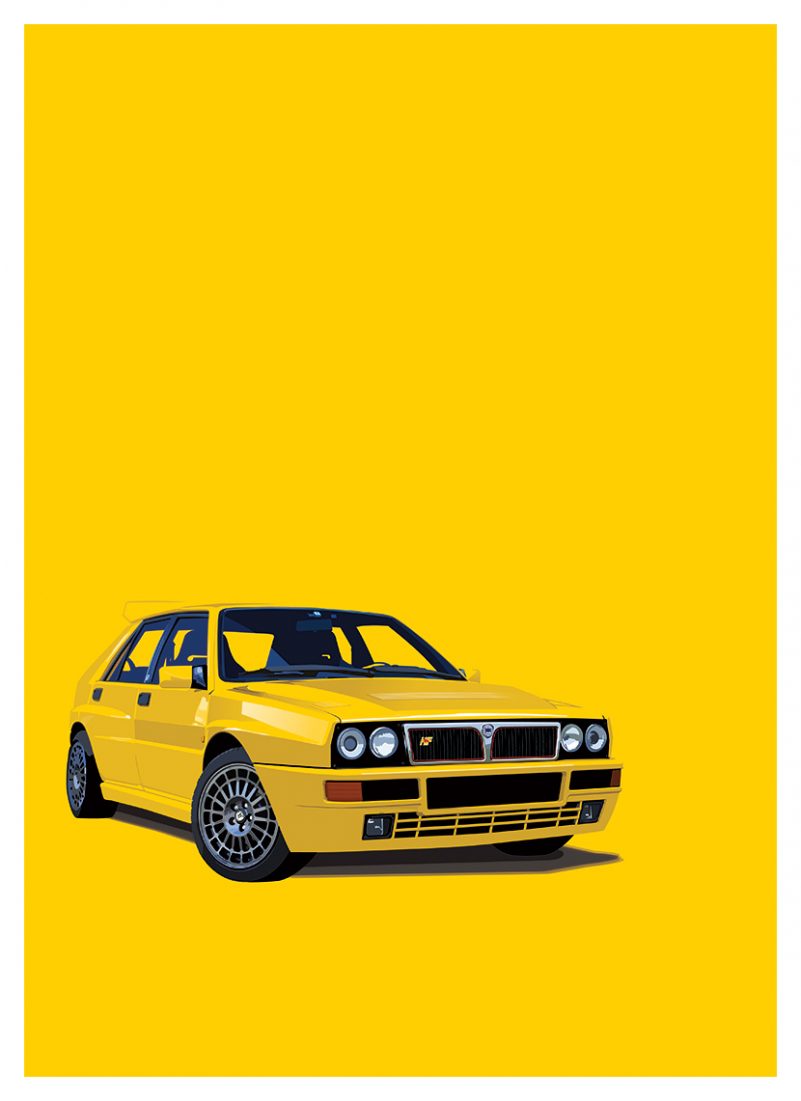 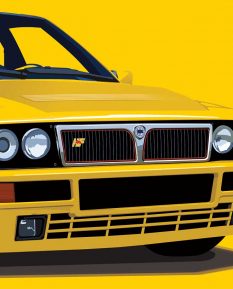 Poster Prints  by Chris Hough
Starting from $ 20. Continue to Sizes

There are so many reasons to miss Lancia, but the Delta HF Integrale stands above them all. A compact and elegant hatch transformed into a bulging and road legal rally-derived monstrosity. This is what Lancia Delta HF Integrale was like. Its rally sibling brings Lancia to the hall of WRC's fame with 6 consecutive titles from 1987 to 1992, overshadowing like Audi Quattro and Mitsubishi Lancer EVO. Today, we are more than happy to share with you this beautiful Lancia Delta HF Integrale poster in yellow.

The story of Lancia Delta started back in 1979 when the car debuted as an elegant and classy yet straightforward family hatch. Though, its qualities and Giugiaro design were praised by the automotive journalists in Europe, which crowned it as the European Car of the Year. It wasn’t most remarkable Lancia until 1986 when Henri Toivonen crashed and died in his Lancia Delta S4, one of the Group B rally beasts. It is what forced WRC to ban purposely built rally cars in favor of mass production-based rally racers. Right at that time, Lancia debuted Delta HF 4WD with 56:44 front to rear power distribution and 165 hp 2.0-liter turbo engine, good enough for 6.4 seconds acceleration from 0 to 60 mph. The rest is glorious rally history.
In its first rally season, Lancia Delta won 9 out of 13 competitions, taking both manufacturer and driver championship. And this was just the beginning. In 1987 Lancia Delta HF Integrale was developed with widened wheel arches to house wider tires just like Audi Quattro. But it was way better than its German competitor.

Lancia Delta HF Integrale was unbeatable on the rally course, but its mass-market presence was nothing less than spectacular. The consumer demand for the victorious vehicle resulted in almost 10 000 sales in just two years, twice more than the homologation minimum. And way more than Ford Escort RS Cosworth and Toyota Celica GT4 has sold.

Lancia Delta HF upgraded to Integrale 16V in 1989, distinctive by a bulge on its bonnet. The wheel arches were widened a little more, and a new Garrett T3 turbo was added into the equation for 200 hp in total. Lancia Delta displayed visible signs of aging with competitors like Celica GT4 and Impreza WRX on the rally stage. This is what made the Delta HF Integrale retirement inevitable. Interestingly, the consumer demand for the Lancia Delta HF Integrale was still significant, so the brand pushed its final version, the Integrale Evolution II – the only specification designed entirely for road usage. When the last Delta HF Integrale Evo II was delivered in late 1994, the whole Delta Integrale series scored more than 40 000 examples. Quite good for a niche family hatch, isn’t it?