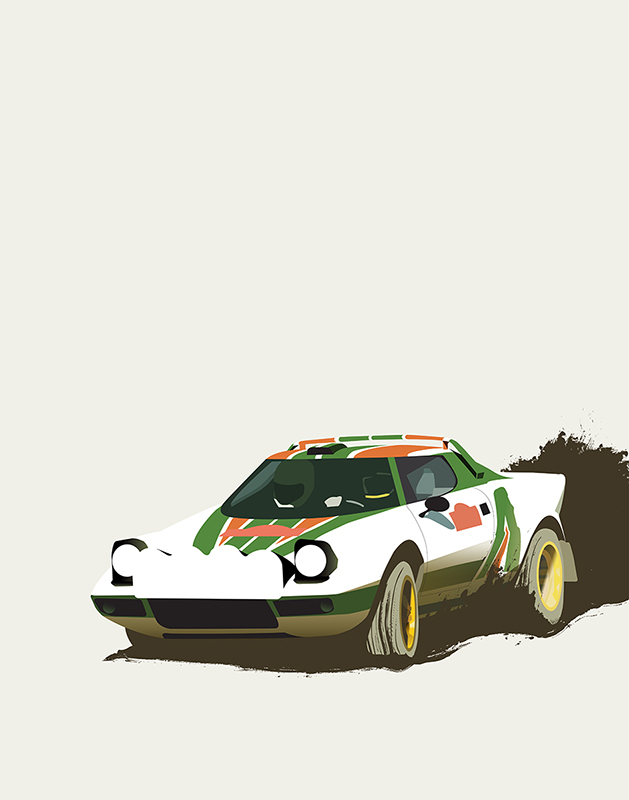 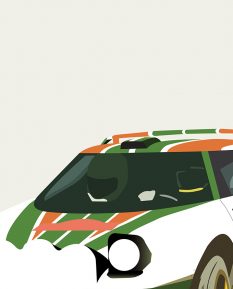 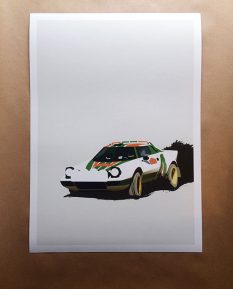 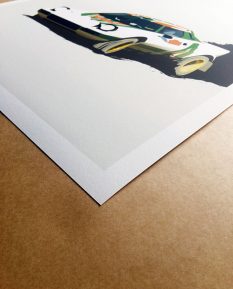 This poster is paying tribute to Lancia Stratos HF - the 70`s ultimate rally beast in a compact form. With Alitalia livery, this Lancia Tipo 829 is nothing less than phenomenal.

Its story is pretty interesting since the Stratos is the first cars that Bertone designed for Lancia. It was the first ever car designed and built for rally purposes. And last but not least, it was Ferrari-powered. In fact, the project was endangered by Enzo Ferrari who denied to deliver already contracted 500 V6 engines sourced out from Ferrari Dino. Il Commendatore thought that Lancia Stratos will be a fierce competitor to his own Dino V6. After the end of its production life, Lancia received their 500 Ferrari Dino engines in order to supply the amount of 500 cars needed for homologation.

Lancia Stratos was pretty successful in rallying with a lot of victories during the 70`s and in the early 80`s. Its engine was able to produce 190 hp, giving the road car a 0 – 100 km/h acceleration time of 6.8 seconds and a top speed of 232. Really good performance for a 70`s road going car weighing just 900 kilograms.

The epic success of Lancia Stratos was closely related to the racing career of Sandro Munari. The Italian pilot already has won Targa Florio and Monte Carlo Rally when he sat behind the steering wheel of the Stratos. The incredible car and his amazing skills gave him a total of 7 WRC victories and one Championship title when he was forced to leave Lancia Stratos in favor of FIAT 131 Abarth.

Even though, the Alitalia liveried racer continued its triumphant competition march. The car scored 18 WRC victories in total and the last was scored in 1981 at Tour de Corse Automobile – 5 years after FIAT discounted Lancia Stratos as their main rally contender.

Now you can feel the spirit of Alitalia livered Lancia Stratos through this poster print, beautifully created by Peter Dials and carefully issued by Simply Petrol.