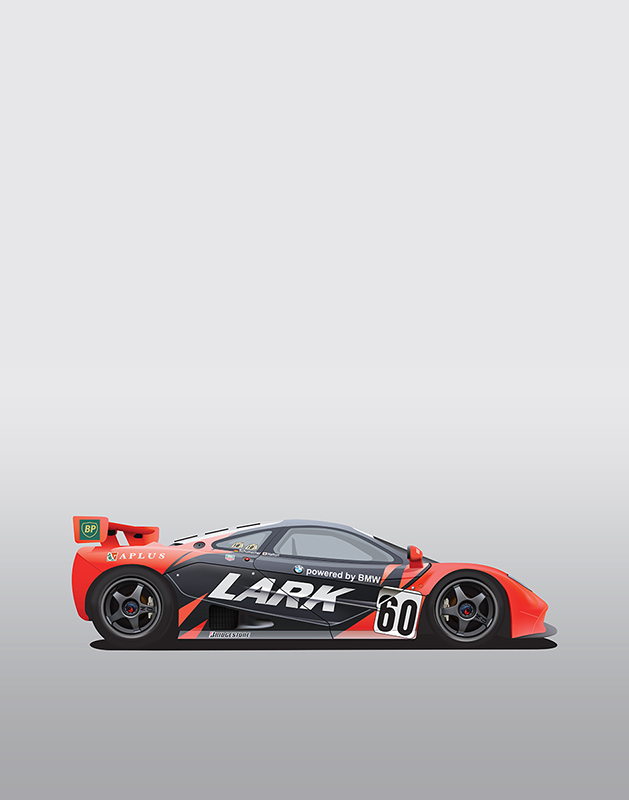 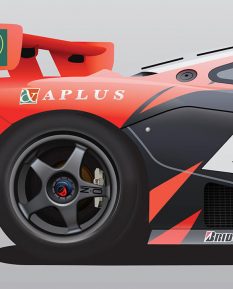 The protagonist in this McLaren F1 GTR Team Lark art print is an exciting combination of British engineering, German mechanics, and Japanese racing culture. It is also the fastest McLaren F1. The epic Long Tail version hits the 330 km/h record at the Mulsanne Straight at Le Mans in 1996.

The car's first participation in Le Mans brings it its first win. This happens in 1995. For the next season, it receives a few upgrades in order to remain competitive. McLaren F1 GTR gets larger splitter in the front, new bodywork suitable for quick repairs and a lighter gearbox. McLaren creates only nine cars in this specification and converts two older GTRs.

Team Goh of Japan, also famous as Team Lark purchases chassis #13R and #14R to compete in the All Japan Grand Touring Car Championship (JGTC) in class GT 500. Team Lark is named after Lark cigarettes which are the team's sponsor. For season 1996, Team Lark relies on David Brabham and John Nielsen as well as on Ralf Schumacher and Naoki Hattori. It is their car depicted in this art print.

Lark McLaren takes the 1-2 finish in the opening competition at Suzuka with winners Hattori/Schumacher. With four victories during the season, Team Lark captures the GT500 team championship title and outperforms the factory-supported squads of Toyota and Nissan.

Up to that day, McLaren F1 GTR Team Lark is the only racer who makes it to the Championship title at JGTC / GT 500. Lamborghini, Ferrari, BMW, Dodge, Mercedes-Benz and Aston Martin try and win a few races but neither of them succeeds to get the title. Well done, McLaren!

Feel the spirit of Team Lark with this glorious McLaren F1 GTR racer art print by Peter Dials. You can order it now at Simply Petrol marketplace.