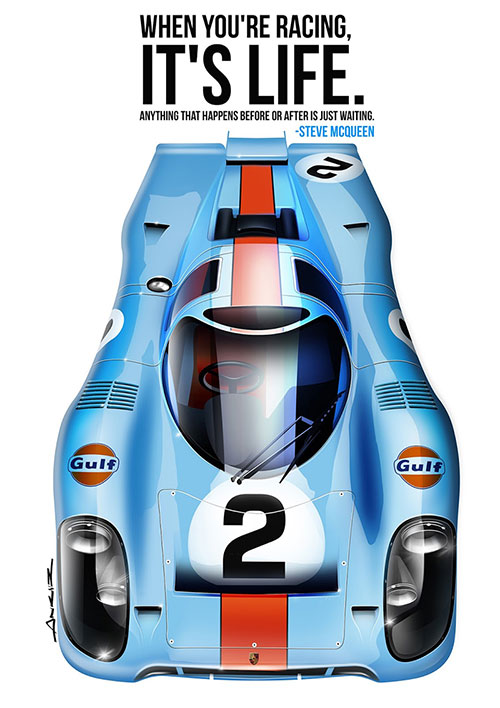 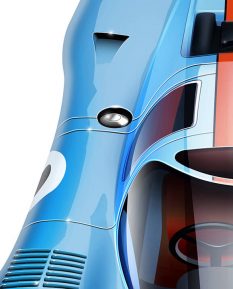 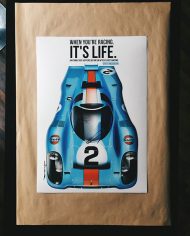 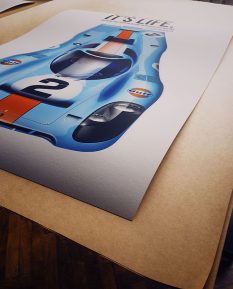 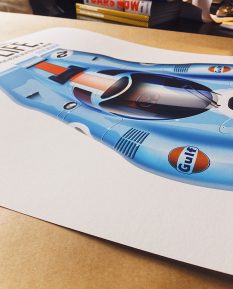 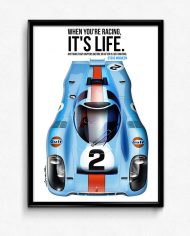 Poster Prints  by Ankur Singh
Starting from $ 20. Continue to Sizes

The combination of the Porsche 917 and the Gulf livery is an art of itself. Add a quote by Steve McQueen from the Le Mans movie, and you get hands on beautiful poster filled with racing emotions.

Few race cars managed to get the same notoriety as the 917. It was extremely quick and reliable enough to secure the first overall Porsche victory at Le Mans in 1970. The success was repeated in 1971, and Porsche 917 in Gulf livery became an icon, strongly supported by Le Mans movie. A picture which can be felt as a plotless nightmare by anyone with no petrol in his veins and as a true masterpiece by petrol heads.

Ferdinand Piech, the grandson of Ferdinand Porsche, is the leading figure behind the development of 917. He saw a chance in a sudden regulation change by CSI which reduced the minimum required production for sports car homologation from 50 to 25 vehicles. This caught Piech` attention, and he managed to get approval for new sports prototype that could win Le Mans. Porsche 917 was designed, engineered and produced in just ten months. The risky move eventually paid off by positioning Porsche at the top of the motorsports thanks to its unique flat 12 cylinder air-cooled engine.

The first tests and contests for 917 weren't extremely promising as its drivers cited it as unstable at high speeds. Such misbehaviour led to significant changes in the tail of the car to keep the drag coefficient low while downforce is high for the Mulsanne straight. Short & long tails 917 were born.

Now you can make this Porsche 917 poster art yours in the form of beautiful poster print, created by Ankur Singh and carefully issued by Simply Petrol.