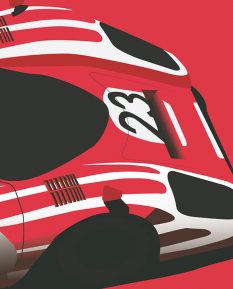 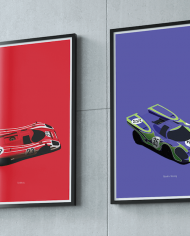 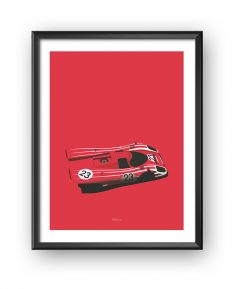 Porsche 917 by Porsche Team Salzburg with racing number 23 is the first ever 917 that won the epic Le Mans competition. This happened in 1970, in the second racing season of Porsche 917 which wasn’t really successful since the car didn’t succeed to win a competition. Well, that was changed in a spectacular manner by this vehicle.

In 1970 the situation prior Le Mans was very intensive. Porsche management was eager to win after its inaugural season. There were 17 Porsche 917 participating in the competition. After grueling racing in rain, fog, day and night, just two of them completed the race in 1-2 positions. Porsche 917 Salzburg with Hans Herrmann and Richard Attwood behind the wheel and racing number 23 took the trophy at home with their red and white, Salzburg liveried car. This was the beginning of the glorious Porsche participation in Le Mans.

Enzo Ferrari had crystal clear view on the Porsche rising and did his best to confront. In order to ensure the money for the development of Ferrari 512, he sold some of his shares at Ferrari to FIAT. In order to populate the Le Mans with his new car, Il Commendatore offered his Ferrari racer to private teams at a price way below the expectations. Unfortunately, such strategy didn’t lead to success and Enzo abandoned 24 Hours of Le Mans in favor of F1.

Now you can feel the spirit of the hippie beast Porsche 917, beautifully created by Peter Dials and carefully issued by Simply Petrol.